The Asus ROG (Republic of Gamers) Crosshair series is the manufacturer’s premium line of motherboards. This one uses AMD’s X570 chipset, which brings PCI Express version 4.0 to the table, along with full support for 3rd-generation AMD Ryzen processors. Like other Crosshair models, the X570 VIII Hero comes with premium components and a broad feature set, although it lacks the VRM watercooling block provided with the much more expensive Crosshair Formula motherboard.

As can be expected from a motherboard in Asus’ premium lineup, the Crosshair VIII Hero comes prepared for overclocking courtesy of 14+2 IR3555 PowIRstages. It’s also fitted with what the manufacturer calls ProCool II power connectors, 10K Japanese-made black metallic capacitors, and microfine alloy chokes. Although the VRM is not equipped with a watercooling block, it does have an aluminum heatsink with a fan.

RAM support is limited by the chipset to 128 GB of DDR4 operating in dual-channel mode. This motherboard includes four sockets that will hold memory modules up to 32 GB. There are two M.2 slots that offer fast storage enabled by the PCIe 4.0 interface, provided that the SSD can take advantage of the added bandwidth, which is double that of the PCIe 3.0 interface.

Ethernet is not as fast as the 10 Gbps offered with e.g. the MSI Prestige X570 Creation or Gigabyte X570 Aorus Xtreme, but the Crosshair VIII Hero offers faster-than-average Ethernet via a 2.5 Gbps controller. The Wi-Fi version of the motherboard also comes with onboard Wi-Fi 6 (802.11ax) with MU-MIMO support.

The two X570 Crosshair VIII motherboards are very similar apart from the water block and OLED panel provided with the Formula version. Notably, the Formula is also equipped with a 10 Gbps Ethernet controller from Aquantia, while the Hero model ships with a 2.5 Gbps variation from Realtek. There are also versions without onboard Wi-Fi controllers.

We have no reason to not recommend the C8H WIFI, really is a fantastic product. The price, however, is incredibly steep …

Like many of the other high-end boards, ASUS has gone for some impressive components here though. Such as 2.5G LAN, as well as Gigabit LAN, paired up with the flagship WiFi 6 AX200 for exceptional connectivity …

This board is featured in our roundup of the top AMD X570 motherboards for 2019. 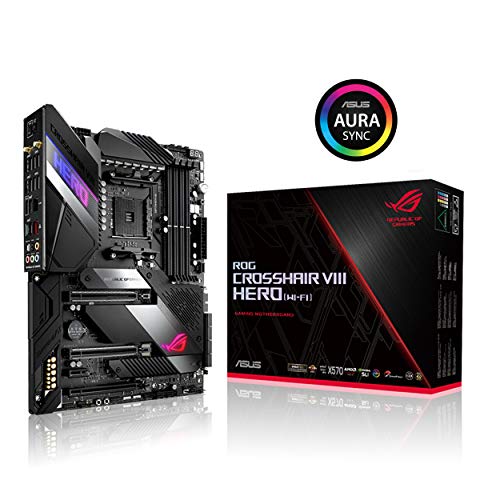