The Asus ROG Crosshair VIII Formula is a variant of the Crosshair VIII Hero, and both are part of the manufacturer’s enthusiast-class lineup of motherboards using the X570 AMD chipset. What primarily sets the Formula apart from the Hero is that the Formula comes prepared for water cooling. It’s equipped with a Crosschill EK III water block over the VRM, which will help keep temperatures down to assist overclocking. The board was launched in 2019 and is among the first batch of motherboards to bring the PCI Express version 4.0 interface to consumers. Like all X570 motherboards, the X570 Crosshair VIII Formula supports 2nd- and 3rd-generation AMD Ryzen processors.

Like other motherboards with the same chipset, RAM support is limited to 128 GB of DDR4 in dual-channel mode (up to 4x 32GB memory modules). Two PCIe 4.0-enabled M.2 slots provide fast SSD storage, provided that the drive is capable of using the interface’s added bandwidth, which is double that of the predecessor.

The X570 Crosshair VIII Formula is also equipped with a BIOS flashback feature, which will lessen the potential risks for builders and overclockers. Similar to most if not all of Asus’ premium motherboards, the proprietary Aura Sync RGB lighting solution is included.

The Crosshair Hero is also available in a variant without an onboard Wi-Fi controller. Otherwise, most of the components and features are mostly identical other than the water block and faster Ethernet included with the ROG X570 Crosshair VIII Formula.

The Crosshair VIII Formula ticks a heck of a lot of boxes when it comes to an extreme-premium enthusiast board, and while its price is definitely extreme, even for X570, it does offer an eye-popping feature set. 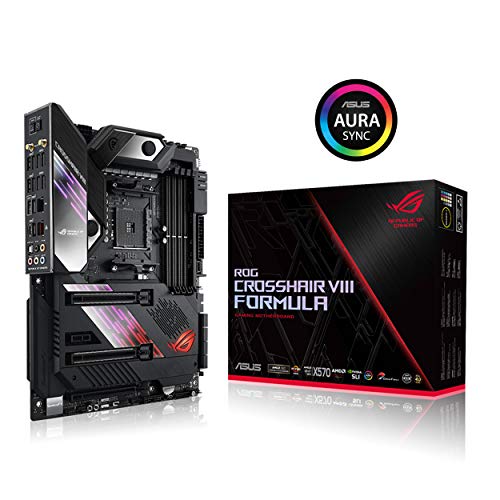