Asus normally has a wide range of motherboards to choose from for every chipset and socket. AMD’s X570 is no exception – between the premium ROG Crosshair VIII and the mainstream Prime boards, you’ll find the upper midrange ROG Strix X570-E (and the slightly trimmed-down X570-F. It lacks some of the premium features found in the Crosshair motherboards, but still includes most if not all of the functionality that will appeal to the average gaming PC builder. 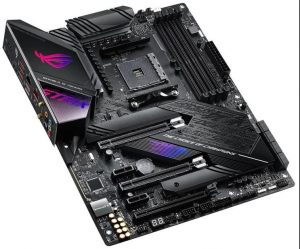 Along with all other motherboards released in 2019 and based on the AMD X570 chipset, an important feature of the Strix X570-E is the introduction of the PCI Express (PCIe) 4.0 interface. This will effectively double the theoretical maximum bandwidth for any attached SSDs and future GPUs that can take advantage of the interface.

The ROG Strix X570-E comes with dual PCIe 4.0-enabled M.2 slots that can be fitted with the included heatsinks. As for system RAM, the board has four slots for up to 128 GB (4x 32 GB) of DDR4 in dual-channel mode.

The power delivery solution is slightly trimmed down compared to the Crosshair VIII Hero and Formula, with 12+4 power stages. This should nevertheless be more than sufficient for all 3rd-gen AMD Ryzen CPUs. The chipset is actively cooled by a fan, and there’s also a MOS heatsink with an 8 mm heatpipe.

In terms of networking, the Strix X570-E has two separate Ethernet adapters, including one Intel Gigabit LAN and one 2.5 Gbps Realtek controller. Wireless networking (Wi-Fi 6, 802.11ax) is also included.

Like Asus’ other premium motherboards, this one is equipped with Aura Sync RGB lighting, on the board itself and via the available RGB headers. To simplify installation, the I/O shield is pre-mounted and there’s also a BIOS Flashback feature.

Asus’ Crosshair Hero is a different motherboard altogether with a different feature set, including the power delivery setup. The X570-E and X570-F, on the other hand, are based on the same PCB design and share most features, though the F version is more affordable and lacks certain premium features. Notably, the X570-F lacks the faster 2.5 GbE LAN and onboard Wi-Fi 6 and also has a different, reduced USB port variety. The F has also been stripped of two power stages compared to the E.

… compared to competing models, its lower price and robust feature set makes it easy to recommend among early X570 offerings.

What Asus has here is a capable X570 board that we’d feel far more comfortable dropping a 12- or 16-core 3rd Gen Ryzen CPU into than the MSI X570-A Pro. 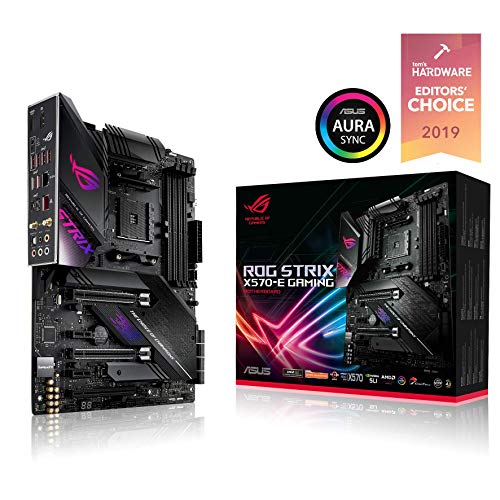