The Taichi brand signifies that this motherboard is part of ASRock’s premium lineup. In this case, it’s based on the AMD X570 chipset that was released in 2019 along with the 3rd-generation Ryzen CPUs. It’s comparatively full-featured and comes with a Wi-Fi 6 802.11ax chip, multiple M.2 slots, and not least a 14-phase power delivery setup.

AMD’s X570 chipset uses the same AM4 socket as previous generations and supports 2nd- and 3rd-generation Ryzen processors. However, it was launched in 2019 and is mainly intended for the 3K CPU lineup. Along with improved support for the latest AMD CPUs, the chipset introduces the PCI Express (PCIe) 4.0 interface on the consumer market. This effectively doubles the theoretical bandwidth available to PCIe-attached devices – primarily SSDs at the time of launch.  It is quite a demanding platform, and like most other X570 motherboards, the Taichi uses active cooling to keep motherboard temperatures in check.

The X570 Taichi has three slots for M.2 SSDs, all of which support the fast PCIe 4.0 interface provided that the SSD is capable of utilizing the additional bandwidth. Two of the slots will hold drives in up to M-key type 2280 (standard length) and one has room for longer 22110 drives. Drives are covered by a single large heatsink that is included with the Taichi.

Like many competitors in the premium segment, the ASRock X570 Taichi features a Wi-Fi 6/802.11ax MU-MIMO wireless module. The Ethernet controller is, however, a more standard-variety Gigabit Intel I211AT. Also like all competitors at launch, the Taichi has four RAM slots (dual channel) for up to 128 GB of DDR4 (4x 32 GB).

Power to the CPU is provided by a 14-phase design using the integrated power stage solution Dr.MOS, which can deliver up to 50A of continuous current for each phase.

To simplify building and maintenance, the Taichi includes a BIOS flashback feature as well as an integrated and adjustable I/O shield. ASRock’s Polysynch RGB functionality lights up the Taichi and comes with an addressable RGB LED strip header.

When only comparing the feature sets of the X570 Taichi versus Asus’ Strix X570-E, there is no clear winner. While the ASRock board has an extra PCIe 4.0 M.2 slots and support for faster RAM out of the box, the Asus model features a 2.5 Gbit/s Ethernet adapter in addition to the 1 Gbit/s Intel variety. The Strix X570-E also has more USB 3 Gen2 slots (header included).

The X570 Taichi is a solid board, but we’d rather pay $20 less for it and have the convenience of easy M.2 slot access. We’d also like to see a firmware update that brings a default RPM slope to the 6000 RPM fan.

Loaded with features like Wi-Fi 6, a solid 12 phase VRM, and some stellar looks, ASRock’s X570 Taichi is a very nice motherboard and a great successor to the X470 Taichi.

The ASRock X570 Taichi is a premium offering from a high-end motherboard manufacturer but the long and short of it is, it falls a little before the mark. The FCH fan is also terrible and must be addressed by ASRock. 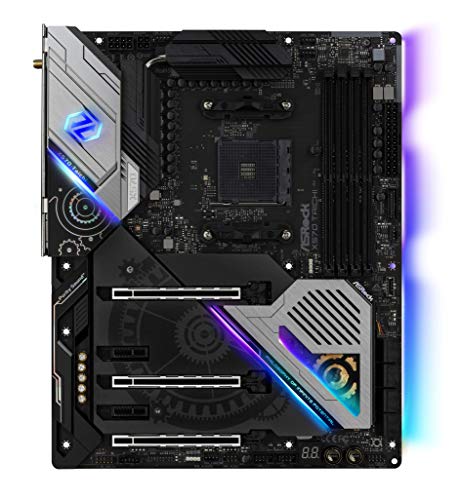