AMD’s long-awaited Threadripper 3000 series is about to arrive and AMD starts out with the 24-core Threadripper 3960X and 32-core 3970X. Both CPUs are set to arrive on store shelves on November 25th.

While we expect the next batch of 3rd-generation Threadripper HEDT (high-end desktop) CPUs to come with even more cores – all the way up to 64 with 128 threads – the first pair of new Threadripper chips are not quite as monstrous. The Threadripper 3960X and Threadripper 3970X offers 24 and 32 cores, respectively.

AMD uses a so-called chiplet design instead of a monolithic processor circuit to build its Zen and Zen 2 processors. The latest Threadripper units come with four interconnected processor chips based on the 7 nm manufacturing process. These are housed on the processor PCB along with an IO circuit that handles communication between the chips. The 3960X has six such cores activated compared to eight in the 3970X. 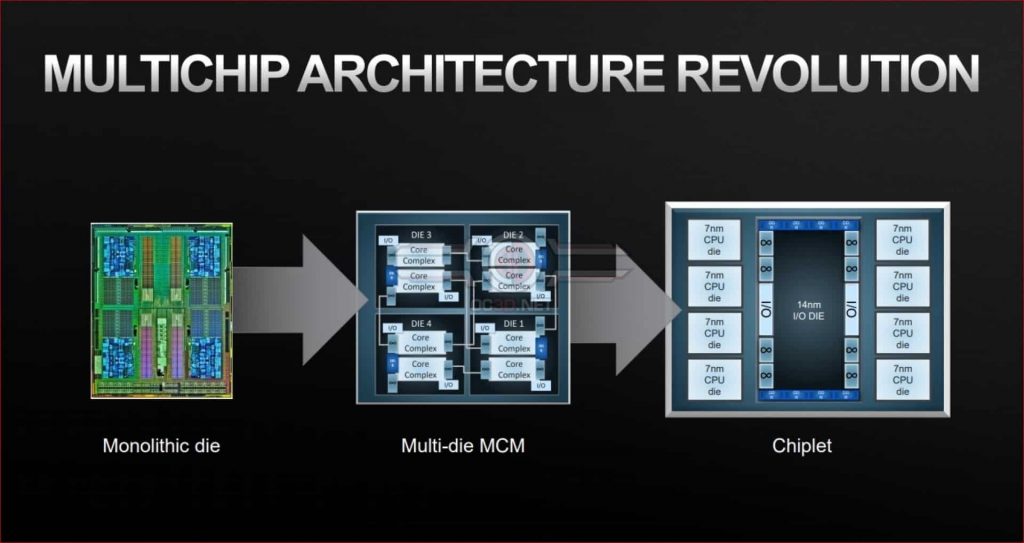 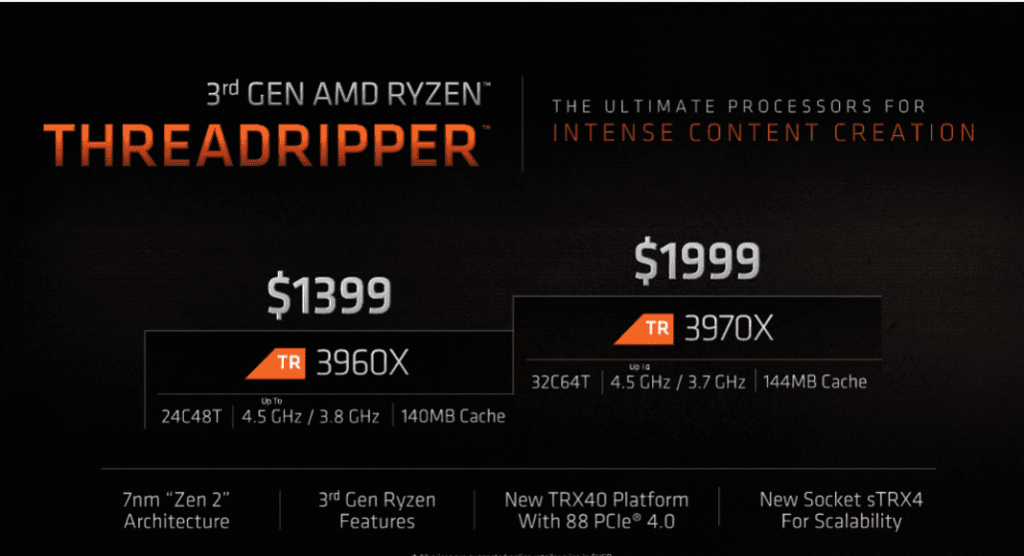 AMD has also revealed the pricing of the upcoming CPUs, which is unsurprisingly higher than the entire 3rd-gen Ryzen lineup, but still highly competitive next to comparable Intel CPUs at $1399/$1999.

Along with the third-generation Threadripper processors, AMD also introduces a new chipset named TRX40. This is also joined by a new socket called sTR4 that, according to AMD, is adapted for scalability – likely indicating future processor models with significantly more cores than the processors announced today.

Like its Ryzen 3000-series counterpart, a key feature of the TRX40 platform is PCI Express version 4.0. TRX40 offers a total of no less than 88 PCI Express 4.0 lanes, of which 72 can be used for components such as graphics cards and storage devices. Another improvement in the TRX40 is that it uses eight PCIe 4 lanes between processor and chipset, resulting in a higher bandwidth of 16 Gbps. 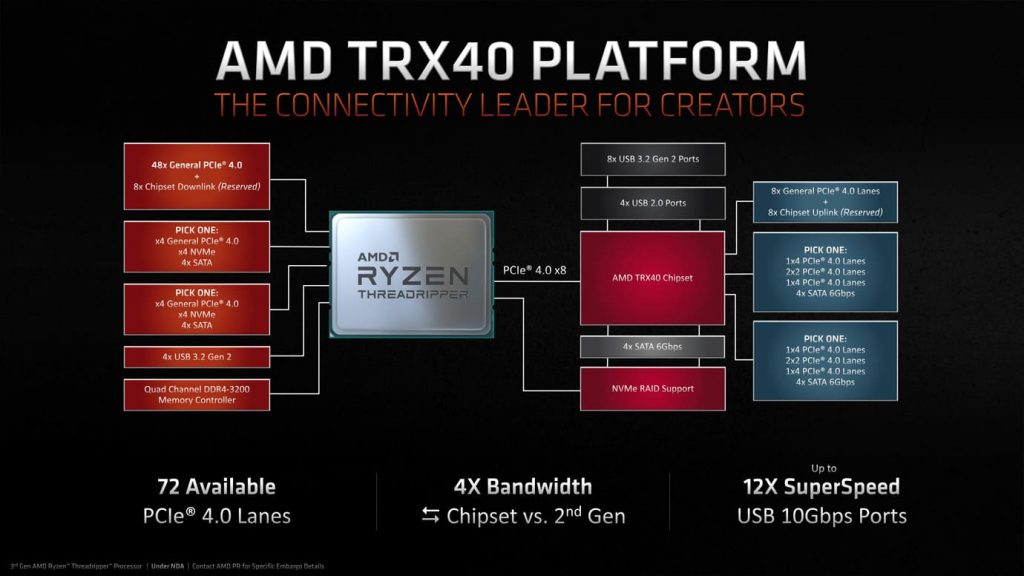 Although the CPU socket is sort of new, existing Threadripper coolers will be compatible with the new sTR4 socket. The reason is that the mounting holes for coolers around the socket on the motherboard are unchanged. However, processor coolers that can handle at least 250 watts (W) TDP values ​​will be a requirement for these new processors. On the topic of TDP values, both the 24-core Threadripper 3960X and the 32-core Threadripper 3970X come with a 280W TDP.

3rd-generation Threadripper processors offer ECC memory support, but it will be up to the individual motherboard manufacturer to implement this feature. Like the 3rd-gen Ryzens, Threadripper 3000 series also supports higher memory clocks than its predecessors. AMD has not yet confirmed exactly what frequencies that will receive official support. 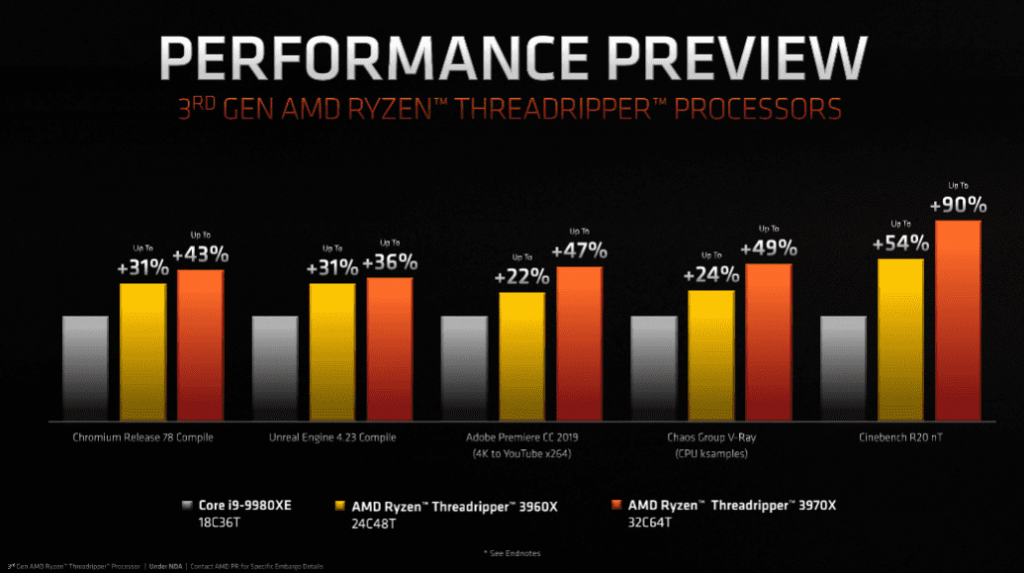 This is from AMD’s official presentation and as such, the numbers should be taken with a grain of salt until verified by independent testers. The exact difference in performance between AMD’s and Intel’s HEDT offerings in different workloads remains to be seen. Existing, 2nd-generation Threadripper processors will not disappear from the market after the launch of the 3960X and 3970X. Instead, they will remain available to consumers as “entry-level” models in AMD’s HEDT lineup.