Out of AMD’s first batch of new 3rd-gen Ryzen processors, the Ryzen 5 3600 has become a best-seller due to its excellent price/performance ratio. It clearly offers better value than the more expensive Ryzen 5 3600X, which is less than 5% faster. On the downside, the fan boxed with the R5 3600 is the smaller Wraith Stealth model instead of the slightly more capable (though not by much), Wraith Spire. 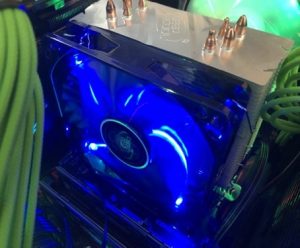 On the other hand, as for overclocking the new Ryzens, AMD seems to have squeezed the most out of them through optimizations, leaving little room for manual overclocks. What you do get (among other things) is the Precision Boost Overdrive (PBO) feature. This doesn’t boost the clocks outright but indirectly, by allowing the CPU to use more current if the temperatures allow it. You enable the feature via your motherboard’s BIOS and/or by using the Ryzen Master software from AMD.

All other things being equal, sufficient cooling will thus give your R5 3600 CPU the best possible conditions for boosting its own performance, even in the absence of traditional overclocking. It all depends on how the included Wraith Stealth performs compared to a decent aftermarket solution – which is what we intend to take a brief but hopefully revealing look at here.

Considering the budget-oriented nature of the Ryzen 5 3600, we’ve picked one of the most affordable tower-style CPU coolers on the market to compare with the Wraith Stealth. We ended up with the DeepCool Gammaxx 400 (Amazon/Newegg/Amazon UK). It’s one of the cheapest full-size tower coolers, with a 120 mm (case size) fan and a nice-looking blue LED thrown in as a bonus. It uses a simple design that’s been around for many years and sockets, but it’s still going strong in terms of sales and popularity.

So, what sort of gains can you expect from just swapping the Wraith Spire for this entry-level aftermarket cooler – without any manual tweaks whatsoever? Let’s find out.

Benchmarks are run five times to produce an average. Other than swapping CPU fans and shifting between stock and PBO modes, we make no changes of any kind to the system.

When running any sort of stress test it quickly becomes obvious that the Wraith Stealth is about as efficient as you’d expect a run-of-the-mill boxed cooler to be. In AIDA64 Extreme (CPU/FPU/Cache), the Ryzen 5 3600 reaches its 95C temperature ceiling in a matter of seconds and hovers just below that limit throughout our 10-minute test run. Meanwhile, clock speeds stabilize at around 3850 MHz on all cores. 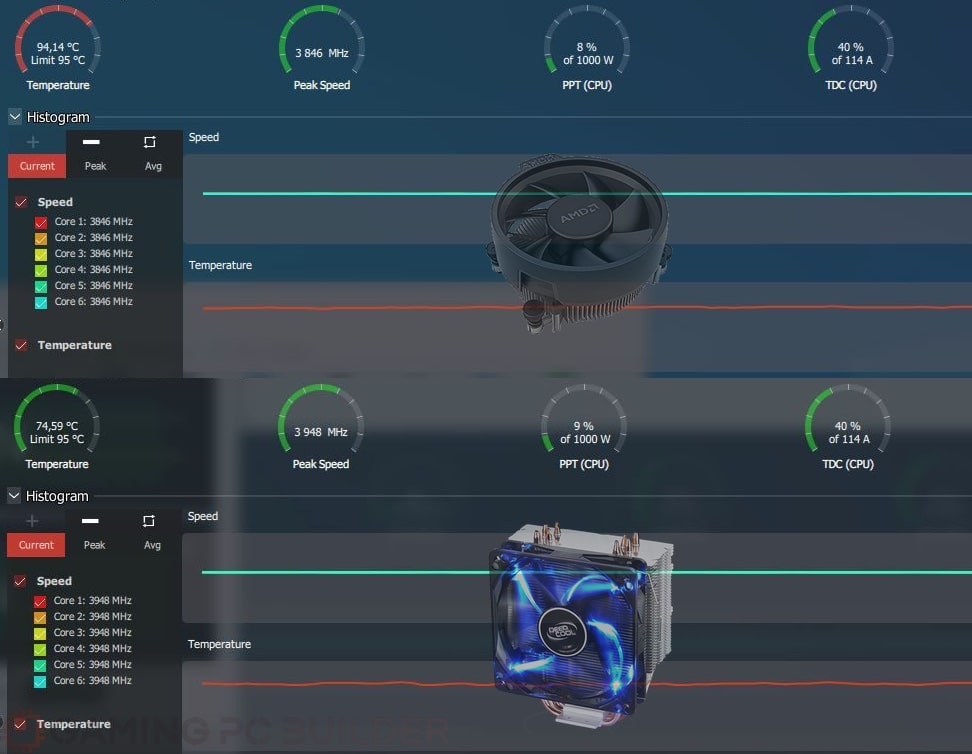 In comparison, our affordable aftermarket cooler cuts those temps down by around 20 degrees C. It also adds about 100 MHz to the clocks in the same situation. The tower cooler also allows the R5 3600 to use 10W of additional power. All settings are identical and Precision Boost Overdrive is activated in both cases.

Maxing out the CPU like this is not representative of the average gaming load (or barely any load), but for us, it’s a useful indicator of relative cooling performance. Unsurprisingly, the large heatsink and full-size fan from DeepCool cools the Ryzen 5 3600 much better than the Wraith Spire. More so than expected, mainly because the Wraith Stealth performs even worse than expected. In any event, it’s clear that the added cooling headroom should allow the CPU to perform better in any situation involving heavy loads.

Moving on to something a bit more grounded in reality; Cinebench simulates rendering performance and provides scores for all cores and a single core, respectively.

As expected, our Cinebench R20 scores are slightly better when using the DeepCool tower. However, activating Precision Boost Overdrive actually lowers the multi-core score compared to just running the R5 3600 in default mode. The single-core score is still higher, but as with all single-core scores, the difference is negligible. This is all well and good since temperatures are less of an issue in single-core loads.

The improved cooler increases the score ever so slightly, but yet again, activating PBO reduces the score by a very small amount. It’s worth mentioning that, to our understanding, Precision Boost Overdrive does not push the clocks beyond the rated maximum boost specs. It only adds current to improve the CPU’s “boost potential” in cases when such potential is available. Consequently, this “boost potential” is lower when the CPU is already sufficiently cooled. We’re nevertheless surprised to see a consistent (if slight) performance drop when PBO is activated.

CPU performance affects gaming in a number of ways, and it’s not just frame rates at resolutions lower than 1440p. Case in point is Civ 6 turn times, and there’s a built-in benchmark to measure those. Although it doesn’t look overly demanding, the game will tax your CPU heavily in the late stages of maps with many AI participants. In other words, a fast CPU will reduce your waiting time between turns.

In this test, PBO worked as intended by lowering the average turn times. There was quite a bit of fluctuation between runs, though, which is important to mention since it’s a rather short benchmarking sequence.

We’ll stick to games with an in-game benchmark for the purpose of CPU experiments. In GTA V, we just turned off V-Sync, set the resolution to 1080p (full-screen) and left the other settings as they were. So it’s not a particularly demanding situation for an Nvidia GTX 1080 Ti, which leaves room for the Ryzen 5 3600 CPU to shine …

… and it did, when AMD’s Wraith Stealth cooler was left out of the equation. With the DeepCool tower installed, GTA V frame rates improved by no less than 14% at the CPU’s default setting. At higher resolutions and settings it won’t be as pronounced, but it’s still a surprisingly large effect from just better cooling.

So, is upgrading the boxed Wraith Stealth cooler to something slightly better worth the effort and money? For gamers and other demanding users, the answer is most definitely yes. The sizzling temps during high loads with the Wraith Stealth are really all the reasons you need. In addition, you get a slight performance boost – without even touching the clocks manually. And unless you want to take your chances on significant manual overclocking, you don’t need water cooling or anything more advanced than a cheap tower to bring the temperatures down considerably.

It does make sense that AMD ships its more affordable CPUs with a small boxed cooler, and for the least demanding users it might be good enough. However, any mid-range gaming or workstation PC build based on the Ryzen 5 3600 will benefit from something better.

The price/performance calculation is, as of now, affected by the price difference compared to the Ryzen 5 3600X, which includes the slightly better Wraith Spire. But you will likely want to upgrade this one too, in which case it evens out. Based on the above, we can recommend the DeepCool Gammaxx 400 because it’s affordable and does the job, even if the build quality can’t compete with a Noctua for three times the asking price. The actual performance benefit in relation to the CPU cost would probably also be highly questionable.

How to Install New Hard Drive

How Fast are SSD Prices Dropping?

The Best Mid-Range Graphics Cards Below $300 in February 2020