The Sapphire Radeon Nitro+ RX 590 8GB Special Edition differs from the reference design in several ways. But it has a lot in common with the other graphics cards in the Nitro+ series, such as the RX 580 variant. Unlike the RX 580 variant, the Nitro+ RX 590 is of course based on the AMD Polaris 30 (XTX) chip. This GPU is an improvement of the Polaris 20 XTX found in the RX 580 and based on the GCN 4.0 (Graphics Card Next) architecture. It supports the same DirectX 12.0 and Vulcan feature sets, and – just like its predecessor – the RX 590 has 2,304 shaders, 144 TMUs (texture mapping units) and 32 ROPs (render output units).

However, the Polaris 30 XT/RX 590 GPU is manufactured at GlobalFoundries using a smaller, 12 nm production process (instead of the predecessor’s 14 nm). This has allowed AMD and custom board manufacturers to increase clock speeds quite considerably. The result is a 15% improvement in theoretical performance.

Sapphire has taken additional steps to improve its Radeon Nitro+ RX 590 by overclocking both the GPU and the card’s 8 GB of GDDR5 VRAM. The card also comes with a custom circuit board (PCB) and cooling solution.

Compared to the reference design, the maximum boost frequency has been increased to 1560 MHz (from 1545 MHz). It also stands out compared to other factory-overclocked competitors thanks to its higher default memory clock.

The cooling on the Sapphire Radeon Nitro+ RX 590 is a dual-fan solution called Dual-X. Together with the PCB, it uses one additional PCI Express slot for a total of two. One of the main features of Dual-X is that the fans can be removed individually and replaced if broken. A broken fan can be detected via Sapphire’s TriXX overclocking and monitoring software.

According to Sapphire, has twice the fin surface area, allowing for better heat dissipation, as well as a dual set of heat pipes. Sapphire has also fitted the Nitro+ RX 590 with an RGB LED.

Compared to Nvidia’s GPU lineup and other Polaris-based cards, the RX 590 averages around 10-15% better scores than its predecessor (RX 580 8 GB). Due to its higher clocks, the Sapphire Radeon Nitro+ RX 590 should be slightly faster than average, at the cost of a higher power draw. The GPU itself has a hard time competing with Nvidia’s competing, Turing-based GeForce GTX 1660 Ti in this benchmark. However, in actual games, the RX 590 occasionally performs better. Power-efficiency has been improved versus the older Polaris chips (better performance at same TDP), but is significantly worse than Nvidia’s competitors.

The official power supply (PSU) requirement for the reference RX 590 is 500 Watts, while the TDP of the card is 175 W. Unlike the reference design, the Nitro+ RX 590 requires an 8-pin plus an additional 6-pin power cable from the power supply. Because of the higher default clocks, power consumption will be slightly higher than with the reference board.

KitGuru: The cooler used by Sapphire works well, the fans are very quiet and the control software reduces noise to an absolute minimum..

Wccftech: For under $300 you simply can’t get more performance and pair that with a high refresh rate 1080p Freesync display and you’ve got a killer combination.

PCWorld: The Sapphire Radeon RX 590 Nitro+ … is better than the XFX RX 590 Fatboy in every way, from performance to size to heat dissipation. 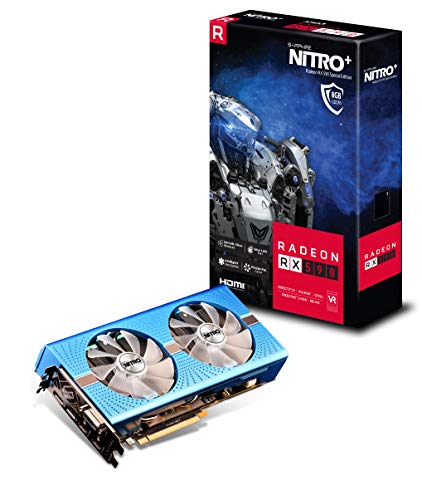