Sapphire’s Radeon Nitro+ RX 580 4GB is based on the AMD Polaris 20 (XTX) chip – a GPU based on the GCN 4.0 (Graphics Card Next) architecture. The GPU itself is manufactured at GlobalFoundries using a 14 nm production process. Its transistor count is 5.7 billion and it has a die size of 232 mm², making it a medium sized, upper mid-range chip as of 2019. The Polaris 20 supports DirectX 12.0 as well as Vulcan and comes with 2,304 shaders, 144 TMUs (texture mapping units) and 32 ROPs (render output units).

What makes the Sapphire Radeon Nitro+ RX 580 4GB differ slightly from other graphics cards using the same GPU and VRAM is the custom PCB and Dual-X cooling solution. The core (boost) clock frequency is also slightly higher at 1,411 MHz compared to 1,340 MHz for the reference design, while the memory clock is lower at 1,750 MHz vs. 2,000 MHz.

The Sapphire Radeon Nitro+ RX 580 is not based on the reference design, which includes only a single fan. Instead it has a custom circuit board (PCB) and dual fans. Sapphire calls this cooling solution Dual-X. One of the more important features of this design is that the fans be individually removed and replaced if broken. According to the manufacturer, the cooling solution has a twice as large fin surface area, allowing for better heat dissipation. It also has a dual set of heat pipes

Although most AMD-compatible overclocking software will work, Sapphire also offers its own overclocking solution in the form of the established TriXX software. One possible advantage of using Sapphire’s software is that it has implemented a ‘fan check’ feature that detects fan malfunctions on graphics cards such as the Nitro+ RX 580.

Compared to Nvidia’s GPU lineup, the RX 580 (Polaris 20 XTX chip) is closest to the GeForce GTX 1060 6GB (Pascal GP106) – at least in actual games. It has a harder time competing with more recent Nvidia cards such as the 1060’s replacement, the GTX 1660. Cards based on the RX 570 will be around 10% slower, whereas the newer but nearly identical RX 590 will be faster by single-digit percentages.

The official power supply (PSU) requirement is 500 Watts. A single-GPU system with otherwise modern hardware (and without overclocking or many attached peripherals) will not consume as much, so there is usually some headroom. The TDP (thermal design power) for the graphics card only, running at its standard clock rate, is 185 W. This makes it less power-efficient than Nvidia’s Pascal architecture, but

Notebookcheck: … the Sapphire Nitro+ Radeon RX 580 operates about 10% faster than its predecessor, which was based on the AMD Radeon RX 480.

TweakTown: SAPPHIRE’s new Radeon RX 580 Nitro+ is the perfect AMD Radeon graphics card for 1080p 60FPS gaming with all of the bells and whistles enabled, and it doubles as a 1440p 60FPS gaming card. 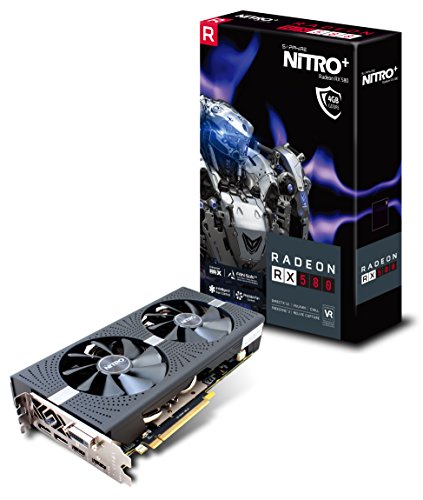