The Gaming series is Gigabyte’s mainstream lineup of graphics cards (with Aorus being the premium counterpart). This Radeon RX 590 Gaming video card is nevertheless a factory-overclocked model. As expected, it is also equipped with the dual-fan Windforce 2X cooling solution, which Gigabyte has previously used to cool down a fair amount of other GPUs.

What’s new here is the AMD Polaris 30 XT chip – also known as the RX 590. This is likely the last revision of the Polaris GPU that has been in use since the RX 480 as well as the RX 580. All of the baseline specs are identical; it’s built on the GCN 4.0 (Graphics Card Next) architecture, with 2,304 shaders, 144 TMUs (texture mapping units) and 32 ROPs (render output units). Also like its predecessors, the Polaris 30 XT supports the same DirectX 12.0 and Vulcan feature sets.

However, the Polaris 30 XT/RX 590 GPU is manufactured using a smaller, 12 nm production process at GlobalFoundries (compared to the predecessors’ 14 nm). This has resulted in up to 15% better performance at the same wattage. Unfortunately, it’s still not as power-efficient as Nvidia’s Pascal (e.g. GTX 1060) or Turing (e.g. GTX 1660 Ti) architectures.

Most non-reference versions of the RX 590 come with a slight factory overclock out of the box, and the Gigabyte Radeon RX 590 Gaming 8GB is no exception. Gigabyte has raised the GPU boost clock (in OC mode) to 1560 MHz from 1545 MHz, or 1%. The memory clock runs at the default speed, 8000 MHz (effective). Here’s how the card compared to some of the other RX 590-based graphics cards, including the reference model and custom boards from Sapphire, XFX and PowerColor:

The Gigabyte Gaming RX 590 also has a custom circuit board (PCB) and a dual-slot cooling solution. We recognize the Windforce 2X dual-fan cooler from an RX 580 that we’ve previously tested, but the same cooler is also used for several other AMD-based cards from Gigabyte. It’s a competent cooler, complemented with a backplate and an RGB LED on top, which also indicates when the fans are inactive (fans stop when the card is idle). 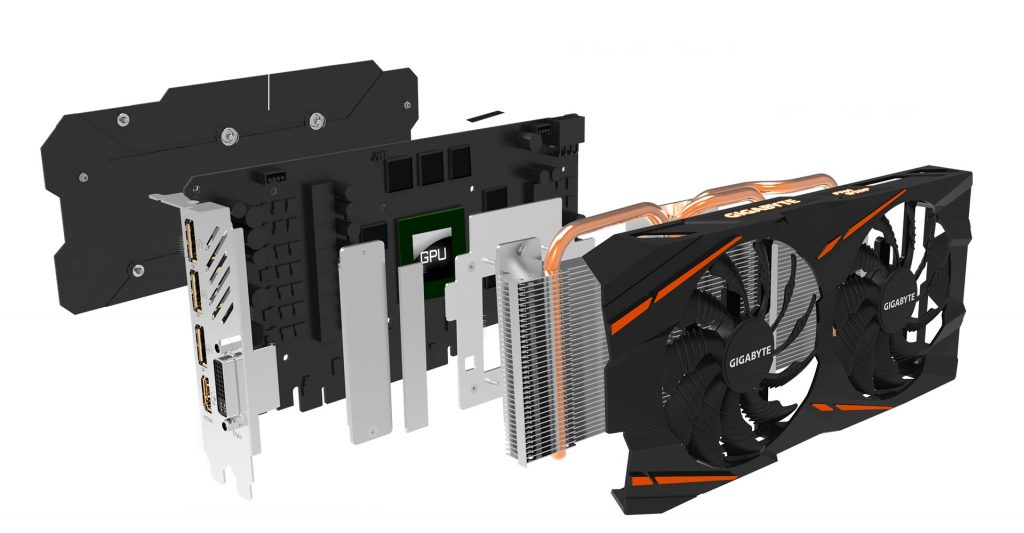 We are not comparing the RX 590 Gaming specifically here, but RX 590 performance in general (average score). Compared to the earlier versions of the Polaris GPU, the average RX 590 is about 10% faster than the RX 580 8GB. The main reason is the clocks made possible by the newer production process. The Gigabyte Gaming RX 590 is factory overclocked by an additional 1%.

The reference RX 590 has a 175W TDP and AMD recommends a 500 Watt power supply (PSU). Due to the higher maximum boost clock, this Gigabyte card will need a bit more power, but the PSU requirement is still the same. And unlike most competing cards, the Gigabyte Gaming only draws power from a single 8-pin PCIe power cable.

There were no professional reviews available at the time of this writing. We will add reviews and update our meta score once they become available. 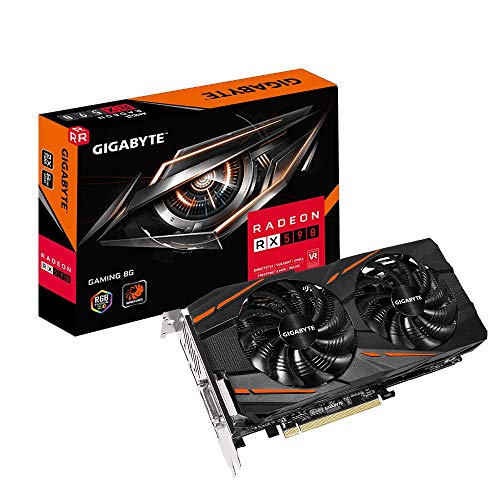