Last price update was: January 20, 2020 11:02 pm
× Product prices and availability are accurate as of the date/time indicated and are subject to change. Any price and availability information displayed on Amazon at the time of purchase will apply to the purchase of this product.

Our meta review (based on user reviews and one video review): Reviews of the Strix RX 590 are generally favorable. Users are happy with the premium features such as Aura Sync, and praise the card’s cooling capabilities.

ASUS ROG Strix Radeon Rx 590 8G Gaming GDDR5 DP...
$309.00
January 20, 2020 11:02 pm
× Product prices and availability are accurate as of the date/time indicated and are subject to change. Any price and availability information displayed on Amazon.com (Amazon.in, Amazon.co.uk, Amazon.de, etc) at the time of purchase will apply to the purchase of this product.
out of stock
Buy Now

Compared to previous iterations of AMD’s Polaris chip (Polaris 10/RX 480 and Polaris 20/RX 580), there are not nearly as many RX 590s (Polaris 30 XTX) on the market. Many are factory overclocked though, featuring premium designs and somewhat more advanced cooling solutions than the reference model. The ASUS ROG Strix Radeon RX 590 8G Gaming is one of the most sophisticated variants of the RX 590 lineup.

AMD’s Polaris 30 XT chip uses the same architecture and has the same feature set as its predecessor, the Polaris 20 XTX (RX 580). The GPU has 2,304 shaders, 144 TMUs (texture mapping units) and 32 ROPs (render output units). However, Polaris 30 is manufactured at a 12 nm production process at GlobalFoundries instead of the predecessor’s 14 nm. This has allowed AMD and third-party manufacturers such as ASUS to increase the clock speeds, leading to improved performance at an equivalent power draw.

Much like competing cards such as the PowerColor Red Devil and XFX Fatboy RX 590, the ASUS ROG Strix Radeon RX 590 comes with a slight factory overclock. The GPU boost clock in the ROG Strix model is increased from 1545 MHz to 1565 MHz, but unlike Sapphire, ASUS has left the memory clock untouched.

One aspect that stands out compared to the competition is that the ASUS card has a triple-fan cooling solution. While it won’t occupy additional PCI slots, it’s a bit longer than competing RX 590 cards. 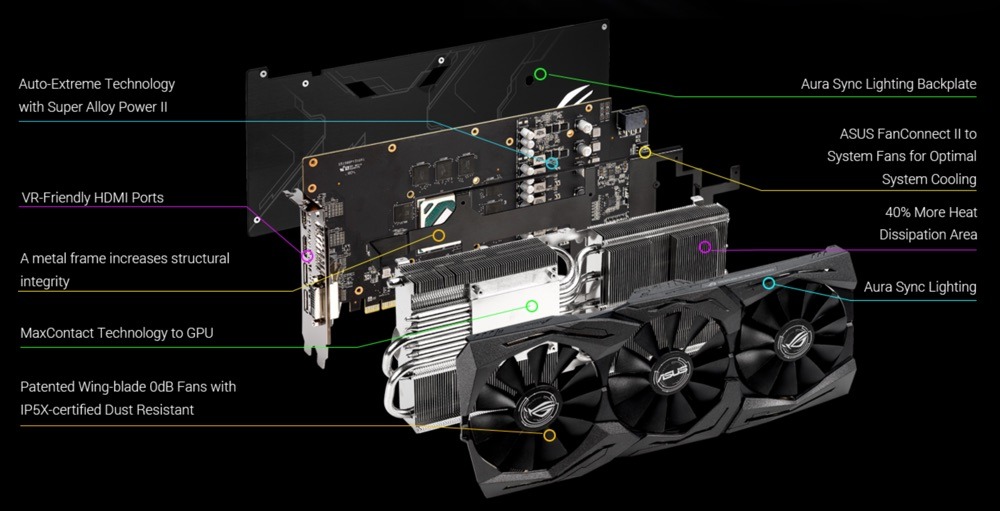 Another selling point for the Strix RX 590 is that it is RGB-lit and compatible with ASUS’ Aura Sync technology.

Thanks to a newer production process and higher clocks, the RX 590 is faster than previous Polaris chips. The ROG Strix and similar 590s are about 10-15% faster than cards with the RX 580. Due to the factory overclocking, the ASUS card will be marginally faster than the reference design. It will also use a bit more power. In all, RX 590 is on average faster than an Nvidia GeForce GTX 1060, but often slower than the GeForce GTX 1660 Ti. And it’s still considerably less power-efficient than Nvidia’s counterparts.

ASUS recommends a 500 W power supply, which is in line with AMD’s recommendations (the TDP is 175 W). The ROG Strix requires one 8-pin PCIe power connector.

No professional reviews of the ASUS ROG Strix Radeon RX 590 8G Gaming were available at the time of writing. This video review covers the card in some detail however:

8Expert Score
Our meta review (based on user reviews and one video review): Reviews of the Strix RX 590 are generally favorable. Users are happy with the premium features such as Aura Sync, and praise the card's cooling capabilities.
PROS
CONS