Ask a PC specialist or technician on how to make your slow, usually old computer to run faster again and they will advice you a common thing – defrag. Though defragmentation is not the only solution to the problem, fragmentation is a common problem to almost every slow computer. That’s why we see dozens of defragmenters offering solution, some were free, some you need to pay to be able to use its full capabilities. For this article, we will examine some of the most popular free disk defragmenter to help you find which defragmenter is the best.

Let say you have a new computer. When you install and/or copy files to your hard drive, files and file fragments are copied and written next to each other (Figure 1). This is because there is plenty of free space. 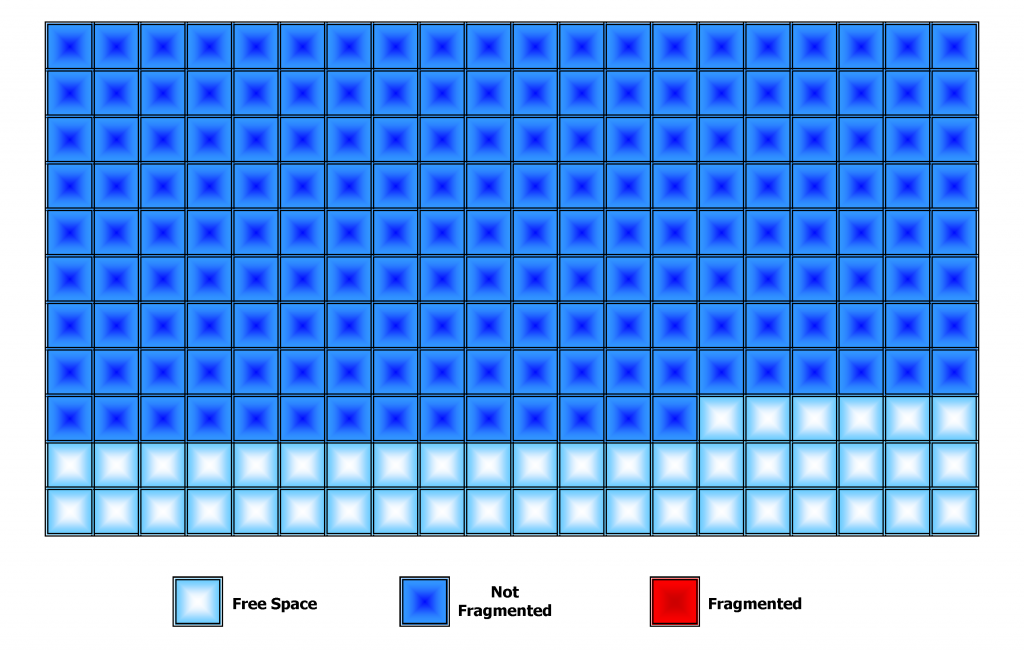 Then you begin uninstalling and/or deleting files. Your hard drive now looks like this (Figure 2). There are now free spaces between files. 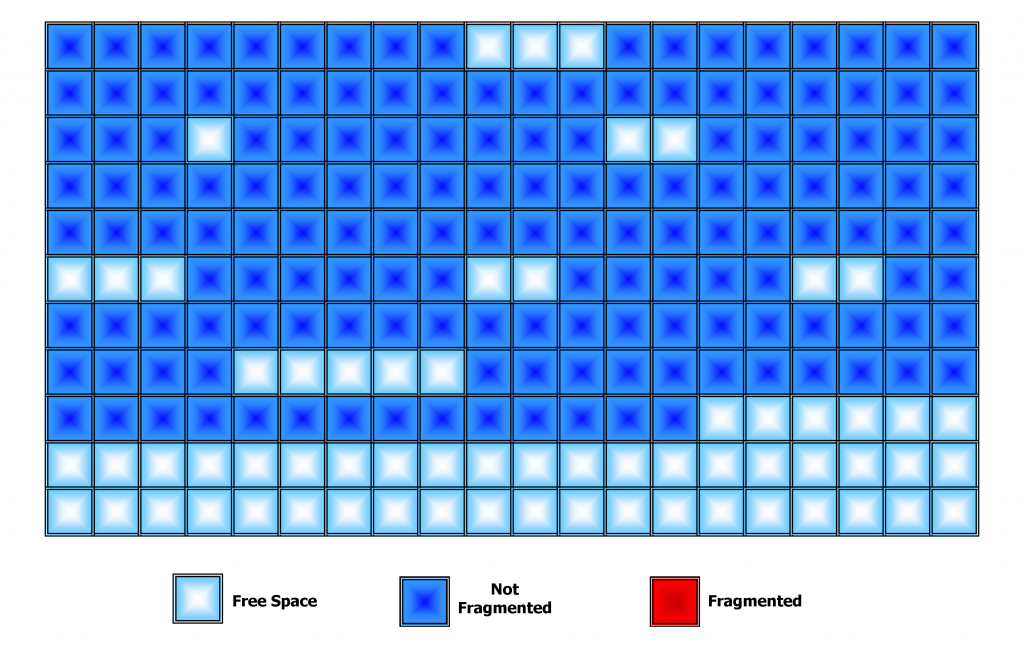 And then you install new applications, or copy plenty of files, or edit a couple of videos. The new file will be copied on free space in-between, and if the free space is not enough, it will look for another free space to write the remaining part of the file, thus making the file fragmented (Figure 3). 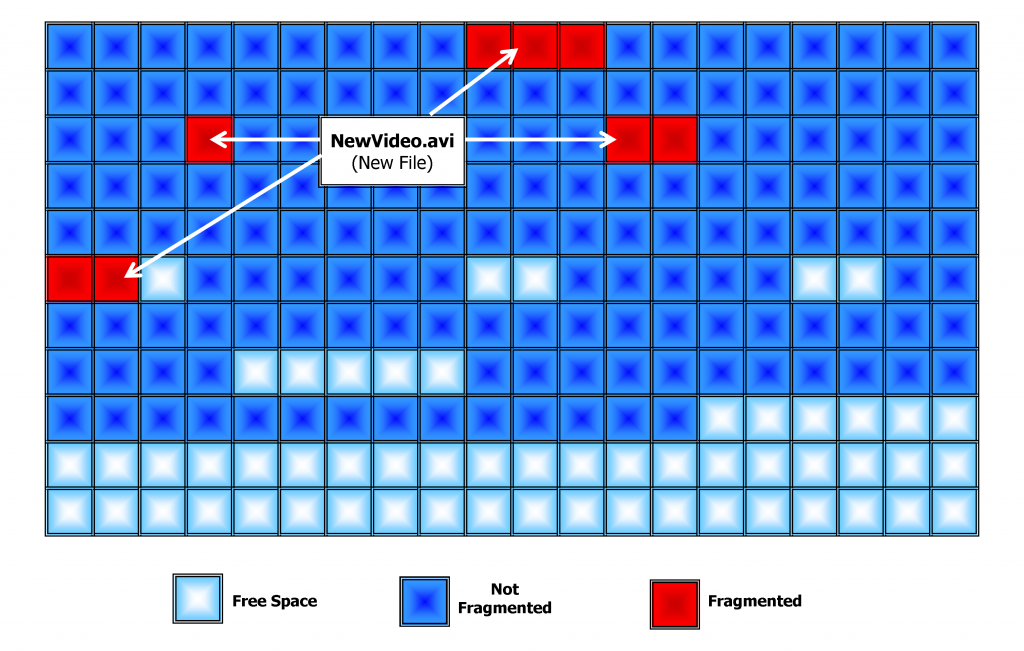 If the file is fragmented, when you access the file, the hard drive will look on another sector of your drive to find the remaining pieces of the particular file, making it slower and took a while load and open. Otherwise if the file is not fragmented, the hard drive will not have to look somewhere else to find the remaining pieces of the file, making it faster to load and open the file.

Defragging/defragmenting is a process of putting together file fragments to speed up file access. That’s what disk defragmenter tool do. Other disk defragmenter also consolidate free space to avoid fragmentation of new files and put the most frequently accessed file to the fastest accessible part of the hard drive, usually the boot files (Figure 4). 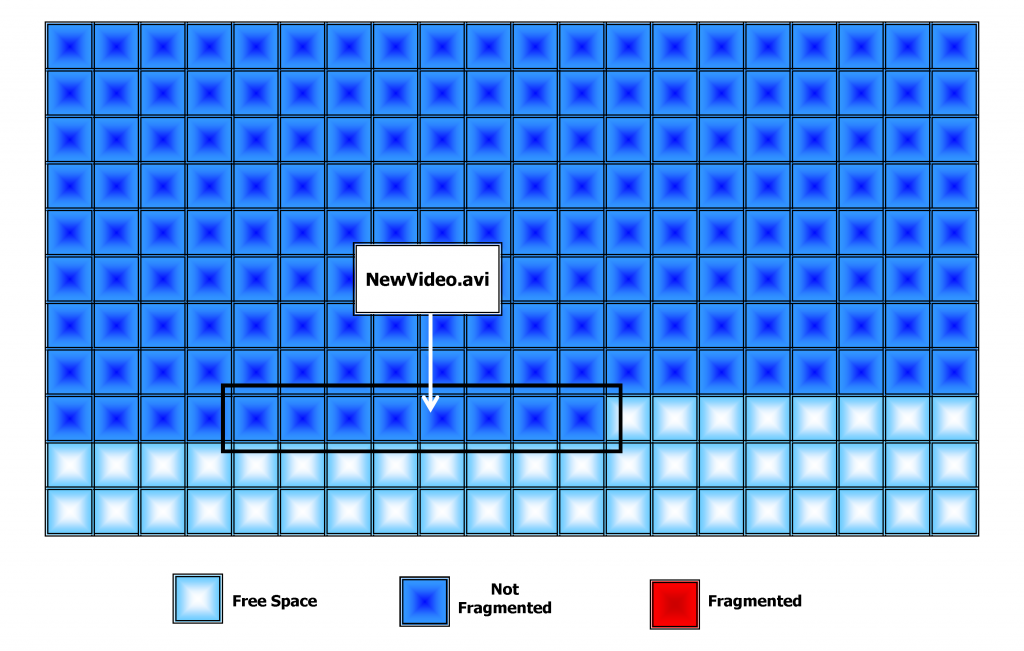 – The 55 GB System Drive serves also as our test drive. All the applications and files used for testing are all in this drive.

The following is the sequence we followed to do the tests for each disk defragmenter.

– We included the “Before” defragmenting on the ranking, which means “Before” will also get points.

– All time-related tests were measured using a stopwatch.

We used defraggler to determine the disk status on “Before” and after defragging.

Take a look at UltraDefrag and Smart Defrag for example. UltraDefrag has lesser fragmented files and yet bigger fragmented file size. It also has lesser total fragments and yet higher percentage of file fragmentation. We also found out that you can also save additional free space after defragging. To be honest, I only found this out after doing the tests.

We didn’t include these results in our scoring because we are after for the actual results and benefits.

Boot-up and Shut down

We used BootTimer to measure the boot-up time and a stopwatch for the shut down. 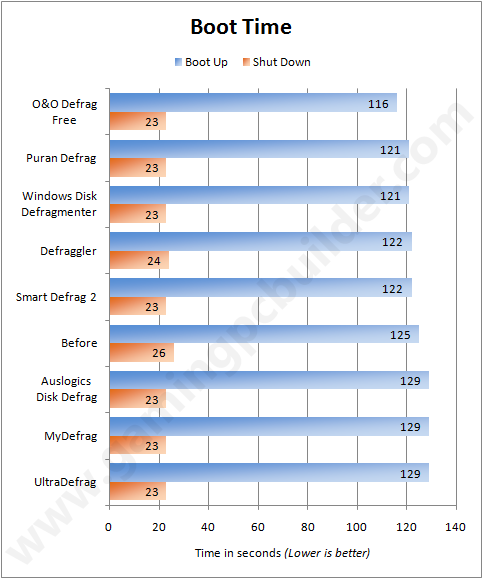 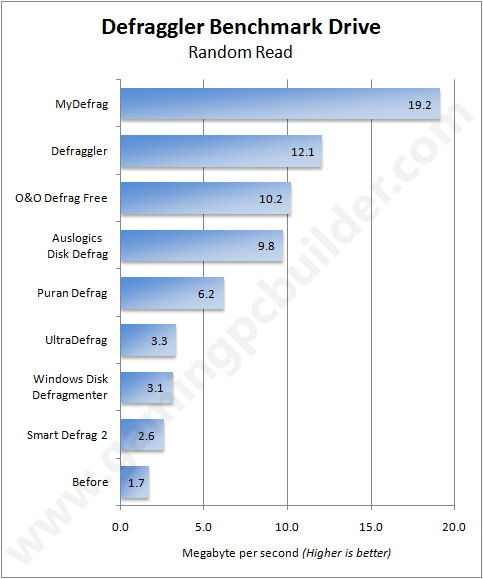 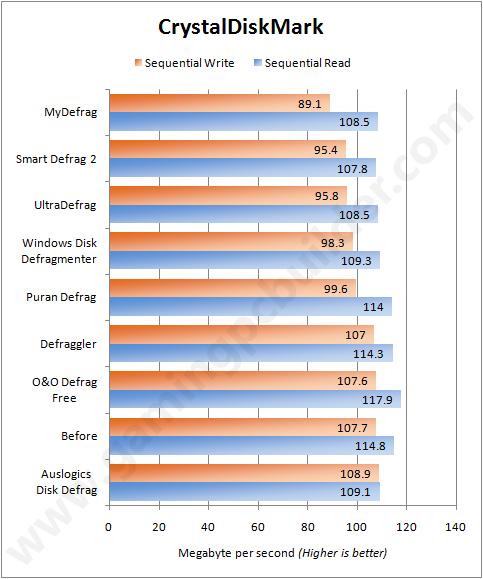 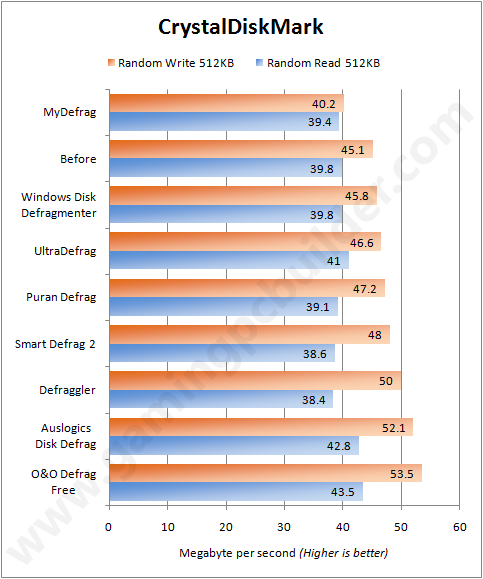 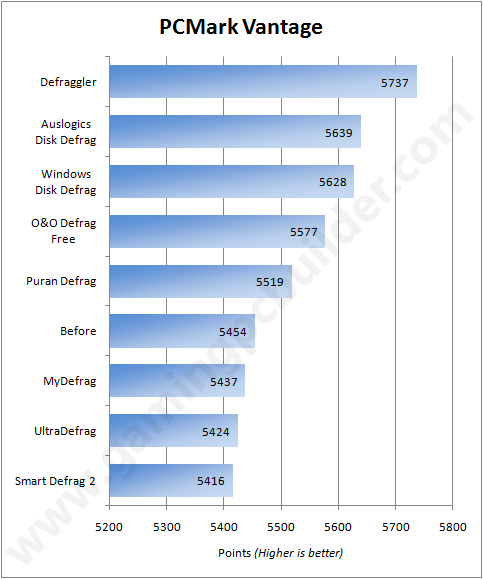 Defraggler gets ahead of the rest of the defragmenters followed by Auslogics Disk Defrag.  MyDefrag, UltraDefrag, Smart Defrag gets lower points than before defragging, but the difference were small and it is almost negligible.

For gaming tests, we used Fraps to measure the frame per second for STALKER Clear Sky and the built-in benchmarking utility for Trackmania 2 Canyon. 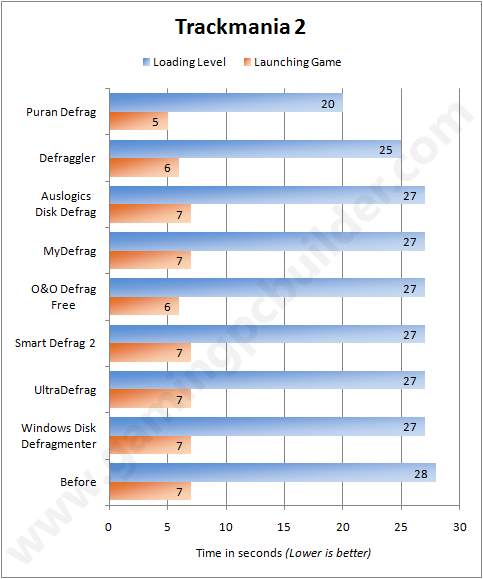 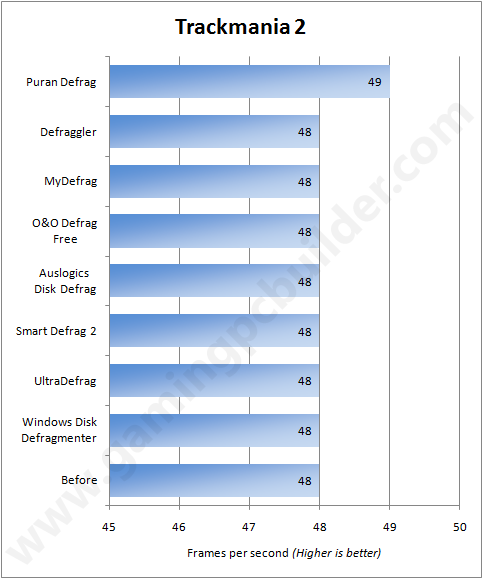 Only Puran Defrag and O&O Defrag made improvements on launching the game after defragging, the rest were just as the same as before defragging.  On the other hand, all of the defragmenters improved in loading level with Puran defrag made the biggest improvements of 8 seconds.

On frames per second performance, all of the defragmenters made no difference after defragging except for Puran Defrag, but even the 1fps improvement is insignificant. 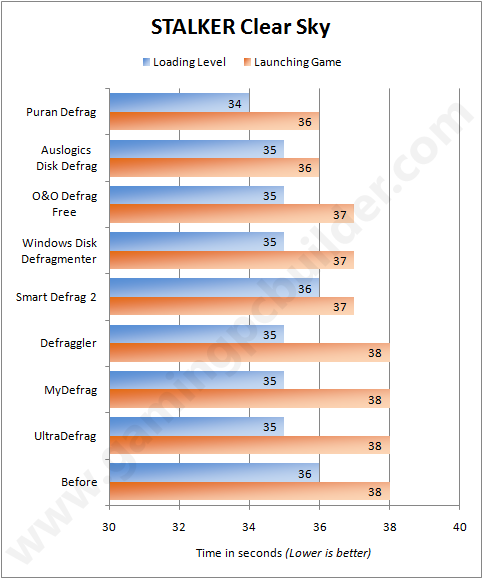 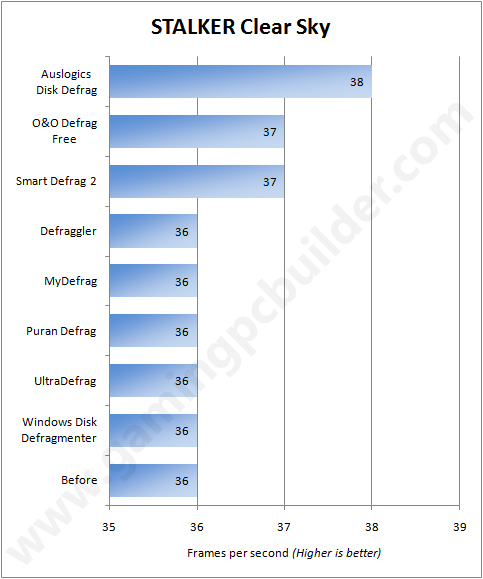 All of the defragmenters made improvements in loading a level except for Smart Defrag while Defraggler, MyDefrag, and UltraDefrag made no difference in launching the game, the rest improved.

Auslogics Disk Defrag, O&O, and Smart Defrag made improvements on frames per second, the rest were just the same as before defragging. 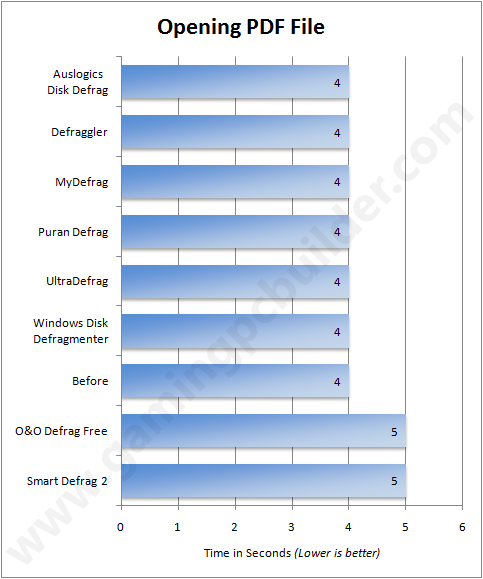 We used a 775 MB, 1hr 35min .vob video file as a test file, which was also the most defragmented file with almost 3,000 fragments before defragging. As we explained earlier, we expect the video to load and open faster after defragging. 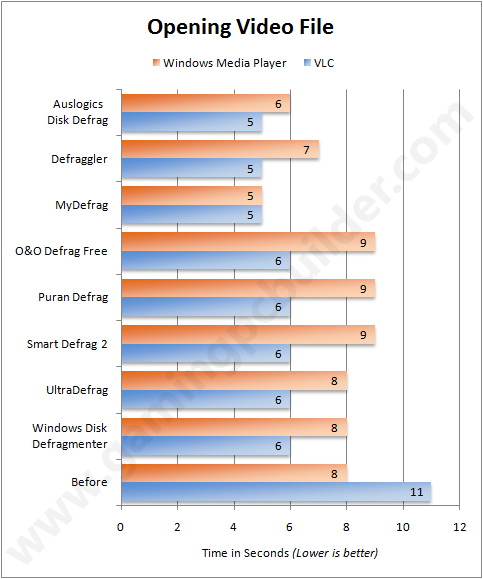 Windows Media Player didn’t give as our expectations as there were some which made no difference, others took longer to open, and only 3 made improvements. On the other hand, VLC gave us what we expect. All of the defragmenters made improvements and made the opening of video to be faster by 5 to 6 seconds.

We used Blender as our 3D application and a small rendering scene as our test project. 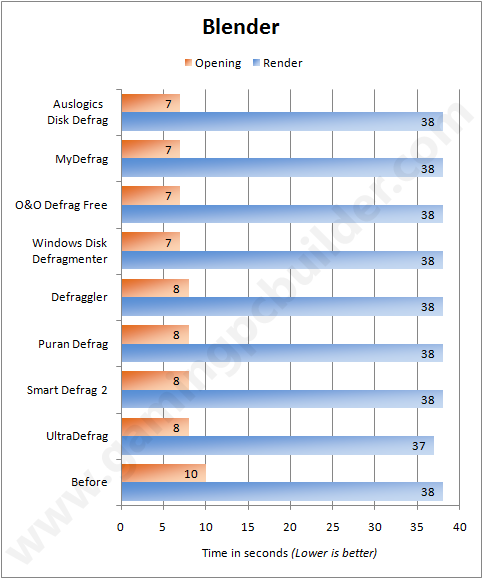 We used a 45MB PSD project for testing the loading and opening speed, a custom action for the speed test, and save the file as PNG. 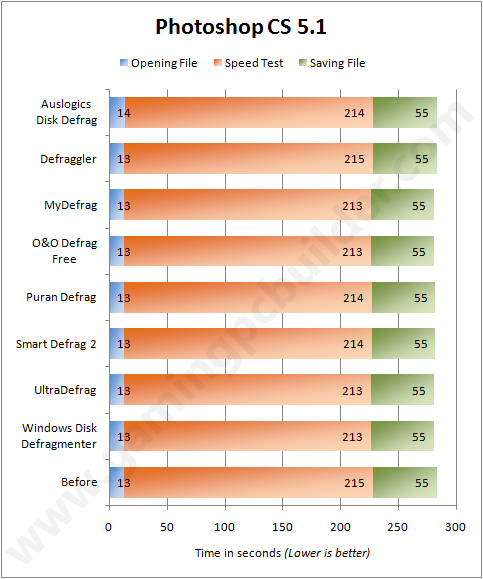 There was almost no difference among the defragmenters in opening the project and saving it in a different format. In our speed test, only Defraggler made no improvement while the rest improved by 1 to 2 seconds. 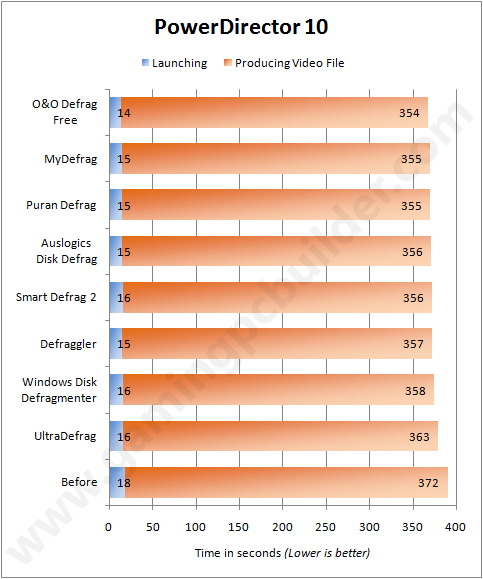 All of the defragmenters made improvements on both launching the application and producing the video file, with O&O Defrag leading overall in this test.

We used 70 jpeg files and a 976MB .exe file, for a total of  1GB as our test files for compressing and extracting using 7-Zip. 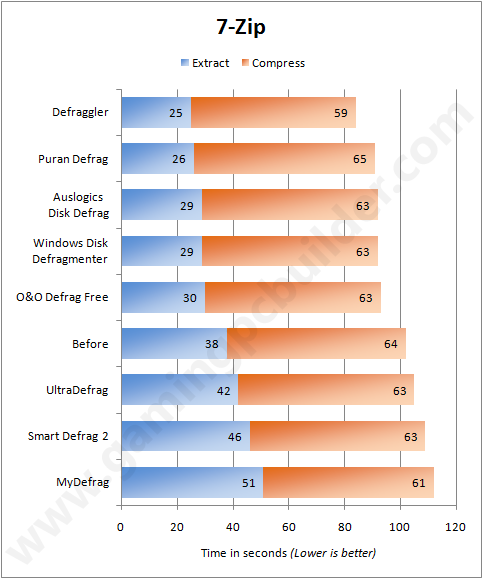 7-Zip didn’t show us that defragging will make extracting and compressing faster. 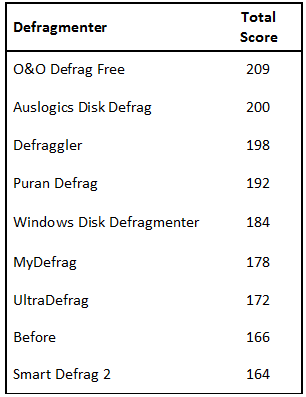 O&O Defrag Free Edition tops our chart with 209 points followed by Auslogics Disk Defrag with 200 points and Defraggler with 198 points. The worst performer was Smart Defrag 2 which performed worse than before defragging.

Defragging, with the right software, will improve the overall performance of your computer. But for some specific tasks and specific software, like Photoshop and Blender, defragging won’t do anything to improve the performance. Only in Defraggler’s benchmarking utility and in video editing where all the defragmenters made improvement after defragging.

How To Buy Games On Ubisoft UPLAY

How to Show FPS Counter

Fix Battlefield V Stuck at Loading or After a Match