Patriot’s Viper VP4100 was launched a few months after the Gigabyte Aorus Gen4, Corsair MP600, and Sabrent’s Rocket Gen 4, but it has a lot in common with these drives. The key feature is support for the PCI Express 4.0 interface, which became available to consumers along with AMD’s 3rd-gen Ryzen and Threadripper platforms. At this point (late 2019), only these platforms will allow the Viper VP4100 and other Gen 4 SSDs to run at maximum speed.

Although it was launched later than its main competitors in the M.2 category, the Patriot Viper VP4100 uses the exact same base parts. That includes the now ubiquitous Phison E16 controller along with 96-layer triple-level cell (TLC) NAND memory from Toshiba. Likewise, all are equipped with a DDR4 DRAM buffer and an ultra-fast SLC-mode cache, which is a must in combination with comparatively slow TLC memory modules.

For the Phison E16-based SSDs to reach their maximum transfer rates, a PCI Express 4.0-compatible platform is required. As of late 2019, the only platforms available to consumers that support PCIe 4.0 is AMD’s X570 and TRX40 – and only in combination with the latest AMD chips.

However, when the additional performance headroom is available, no competing M.2 SSDs from 2019 can reach the same maximum performance as the Patriot Viper VP4100 and other E16-based drives. Although the components are largely identical, the firmware is not, so performance varies slightly between the drives. The Viper’s advertised specs closely resemble Sabrent’s and Gigabyte’s drives but offer somewhat higher peak IOPS performance. In real-world scenarios, the difference should be minimal.

The Viper VP4100 is available in three capacities: 500GB, 1TB, and 2TB, with peak sequential write performance being lower in the 500GB capacity.

The Patriot Viper 4100 is equipped with a heatsink, and would not be suitable for laptops. Either way, there are no PCIe 4.0-enabled laptops at the time of writing.

If you want one of the best storage drives you can get for your new AMD system, then the Viper VP4100 from Patriot is the way to go. 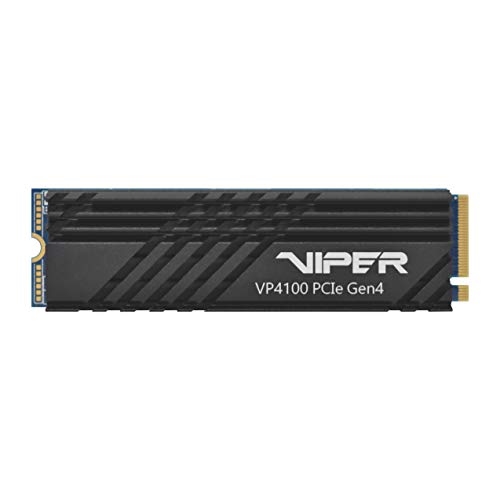