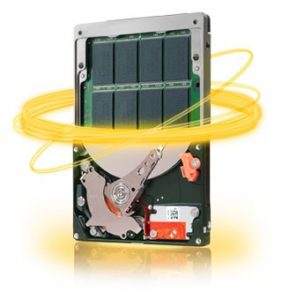 The first hybrid drives that came out a few years ago didn’t offer much of a performance boost. Now Seagate is trying again to give us the best of both worlds with its new Momentus XT, a roomy 500GB 2.5-inch hybrid drive with 4GB of SLC NAND flash for laptops for less than $150, and this time it looks much more promising.

The solution is simple – a 4GB NAND circuit goes on top of a traditional 500GB notebook hard drive and works as an extended cache. In terms of pure transfer speed, the hybrid drive is not much faster than a conventional hard drive, but in some aspects, the Momentus XT is almost as fast as a real SSD.

Seagate uses a technology called “Adaptive Memory Technology.” Briefly, this means that the Momentus XT constantly monitors the most frequently accessed data and stores it in its SSD-type flash memory and then optimizes itself for future needs Just like in a normal SSD, the information stored in flash remains in the drive even when the computer is turned off. 4GB of built-in flash doesn’t sound like much, but apparently it’s sufficient to provide a very noticeable improvement in some scenarios.

The folks over at Anandtech have had the opportunity to test the Momentus XT and seem seriously impressed with its performance. For example, it managed to boot a Windows 7 machine in just 15.3 seconds, whereas the same task took 49.5 seconds with a standard 5400rpm Seagate hard drive. Even the Western Digital VelociRaptor was beaten by five seconds. Anandtech also noticed significantly improved performance in circumstances like working with large Excel documents and opening multiple programs simultaneously. Photoshop CS4 was also given a speed boost.

Real SSDs are still much faster, but what makes the hybrid interesting is that it’s a fair compromise between speed and cost. The 500GB Momentus XT can be found for about $150 online, which is more expensive than regular drives, but significantly cheaper than a large SSD. Seagate promises an 80 improvement in performance compared to 7200rpm hard drives and judging by the tests there might be some truth to these claims.

The Momentus XT appears as a single drive to the operating system and works in all environments, whether it’s Windows, Mac OS X or Linux. It is currently available for preorder on Amazon.

Indilinx and Sand Force to get SATA 6Gbps in Q4

As a PC gaming enthusiast since the 3dfx Voodoo era, Jesper has had time to experiment with a fair few FPS-improving PC parts over the years. His job at GPCB is to test and evaluate hardware, mainly focusing on GPUs and storage devices.