One of the somewhat confusing aspects of the SSD market is that ‘newer’ technology does not necessarily equal ‘better’. This is most pronounced in the move towards additional bits per cell in memory chips.

It should be mentioned that in spite of my own earlier, though at the time reasonably well-founded skepticism, triple-level cell NAND actually turned out alright. With drives such as the EVO series, Samsung and other manufacturers have proven that TLC NAND is clearly a viable option in consumer products. 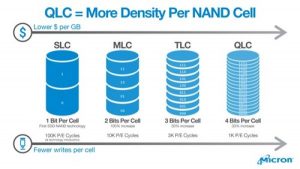 And now Samsung once again moves on to the next level of affordability (in theory) per storage unit with QLC NAND. That is quad-level cell memory chips that, as the name implies, store yet another bit per cell compared to TLC (three bits), MLC (two bits) and the most durable SLC (just one).

This also brings to light that the naming conventions don’t make sense. MLC is short for multi-level cell, and so really includes all variants other than SLC. If QLC is Quadruple, the next level will be Quintuple (also QLC). Why not call it e.g. 2LC, 3LC, 4LC, 5LC? But I digress.

Samsung and others have come up with some clever solutions to these problems in the past, using spare capacity, or over-provisioning, and smart wear-leveling algorithms (among other things), but there are always compromises.

As a result, you will probably never notice that your drive wears down until you’ve thrown the whole computer away for other reasons. Servers and other devices with a continuous workload are another matter, but will usually not come in contact with the cheapest SSDs.

A new level of affordability, in theory 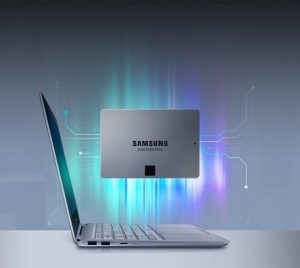 This brings us to the latest and greatest in terms of manufacturing efficiency, the new Samsung 860 QVO. With its new QLC-based drive, it’s immediately clear that Samsung’s focus here is on the always important $/GB formula – a unique selling point in itself. Thus, the company launches only high-capacity drives ranging from 1TB up to 4GB in the series.

Nevertheless, the specs of the 860 QVO are quite impressive. On paper, it looks like the QVO series might perform on par with more expensive drives, while at the same time offering decent endurance. Sequential read/write performance is ‘up to’ 550/520 MB/s and the endurance rating is 360 TBW for the 1 TB drive, which is more than half of the EVO (600 TBW).

As always, SSD performance is much more than the theoretical sequential throughput, which is confirmed by Anandtech. This could have been fine if the prices had been competitive, which they, unfortunately, are not so far.

As it stands, the MSRP on the 1 TB 860 QVO is $149, which is about what you’ll pay for a 1 TB 860 EVO right now – a drive with twice the endurance and better overall performance. It’s highly likely that prices on the QVO series will come down eventually. At this time, however, there is no reason whatsoever to pay even slightly less for a QVO drive as you would for an EVO – it needs to be considerably less expensive to offer good value.

How to Remove FPS Cap in World of Tanks

As a PC gaming enthusiast since the 3dfx Voodoo era, Jesper has had time to experiment with a fair few FPS-improving PC parts over the years. His job at GPCB is to test and evaluate hardware, mainly focusing on GPUs and storage devices.