The GTX 1660 OC 6G with Windforce fans is an entry-level graphics card from Gigabyte, based on the Nvidia TU116 chip (see our roundup of the top cards with this GPU here). It comes with a slight factory overclock and stands out from the entry-level competition mainly by being equipped with two fans instead of one. There’s also a triple-fan version of the same card, as well as a dual-fan model without the factory overclocking.

Gigabyte’s GTX 1660 lineup consists of four cards that mainly differ in the number of fans included and whether there’s a factory overclock. The “mainstream” dual-fan card is only available with a slight overclock, from the default 1785 MHz to 1830 MHz (boost clock). In the triple-fan OC model, the boost clock is slightly higher still, at 1860 Mhz. Gigabyte also offers a single-fan ITX variation of the GTX 1660, which has a boost clock of 1800 Mhz. The memory clocks (6GB of GDDR5 VRAM) have been left untouched and run at 8,000 MHz (effective) to deliver a memory bandwidth of 192GB/s.

Like most graphics cards with the GTX 1660 GPU, all Gigabyte cards require a single 8-pin PCI power cable (TDP is 130 W). All four of the cards are two PCI slots wide but vary in length depending on the number of fans (all 90 mm fans). A protective backplate is included with the dual- and triple-slot models.

Since the GTX 1660 is a lower mid-range GPU, there is no “Founder’s Edition” (reference design), meaning that there is no default PCB or fan layout. While significantly faster than the GTX 1650, the GTX 1660 is also significantly slower than Nvidia’s RTX series and it also lacks support for real-time ray tracing on the hardware level. But it’s still based on the Turing architecture and includes additional cache per CUDA core, variable rate shading, and several other optimizations compared to the preceding Pascal architecture. Any GTX 1660 card including the Gigabyte models will perform better than the GTX 1060 6GB that it replaces.

The above results are averages from a variety of systems running these cards and don’t represent the Gigabyte card specifically. They should nevertheless be quite representative of relative GPU performance.

… perhaps the GeForce GTX 1660 is an interesting enough card for GeForce GTX 960/970 owners that are looking to upgrade, but only if the price is right. 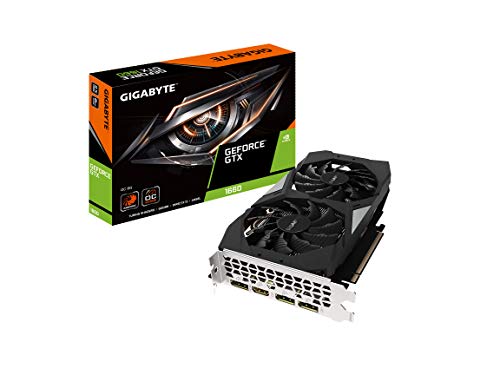