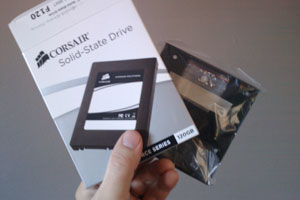 SSDs based on the SandForce SF-1200 controller are practically dominating the market right now – and for good reason. SandForce drives are about as reliable as MLC drives get and outperform both Intel and Indilinx-based drives in most situations. They also come with TRIM support, which helps keep the drives fast and healthy by wiping unused (deleted) blocks to eliminate the overhead in subsequent overwrites.

A handful of manufacturers are making SandForce SF-1200 drives today, including OCZ, Patriot, Mushkin, A-DATA, and Corsair. In this review, we are taking a look at Corsair’s variant in the form of its Force series, in the most recent F120 revision (120GB, firmware 1.1).

Neither the packaging or the drive itself is much to look at, but that’s hardly important since it’s going straight into a computer case or laptop. Speaking of which, Corsair has been friendly enough to include a 3.5″ to 2.5″ bracket for mounting the SSD in a desktop PC. This is not an expensive part, but it’s a nice gesture and saves you some time and a few bucks looking one up separately.

But let’s move on to the interesting part, namely what the drive is capable of. There are some differences between SandForce drives from different manufacturers, but not much in terms of sequential read/write speed.

Quoting sequential read and write speeds right from the manufacturer is not that risky when it comes to SSDs. Corsair claims the same specs in this department for the F120 as for its main competitor, the Vertex 2 from OCZ. The specifications can, of course, be verified easily by running ATTO, which is the same benchmark that most SSD manufacturers use for testing. 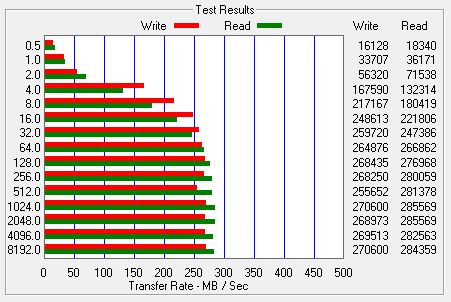 The Corsair Force F120 has no problems matching – and sometimes exceeding – 285 MB/s when reading larger files. Unlike many competing drives, the F120 (and other SandForce drives) is also very good at writing at high speeds, in this case over 270MB/s. The drive also appears to operate extremely well at the important 4K level. This is confirmed by CrystalDiskMark, which yields excellent results in this area. 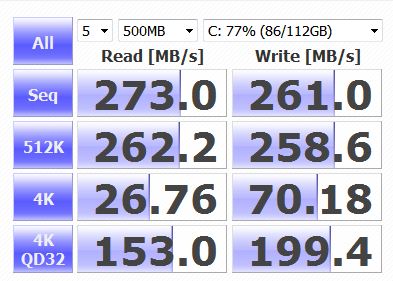 PCMark Vantage is another popular synthetic benchmark that supposedly mimics real-world performance in various scenarios. Here, the F120 is statistically on par with Micron’s RealSSD C300. As a piece of anecdotal evidence, the F120 boots up Windows 7 on the test system in roughly 25 seconds from pressing the start button until all icons and gadgets are loaded on a fully functional desktop.

Note that the above is not a fair apples-to-apples comparison since the C300 runs over the SATA 3.0 6GBps interface (in this case). The Corsair Force F120 is a SATA 2 drive. It’s worth mentioning that there are still no laptops available that take advantage of the fastest SATA standard. So far there hasn’t been much reason, but considering that some SSDs are now exceeding the maximum SATA 2 transfer rate it’s time for an upgrade on the mobile front. In desktops, you can, of course, get around the speed limit by using two identical drives in RAID 0.

My expectations were admittedly high with this drive, but it’s worth pointing out that the Force F120 is a great SSD that delivers as promised. It is hard to think of anything overly negative to say about the drive. It is relatively expensive, but so are the competitors–after all, the SandForce drives are among the fastest 2.5-inch SSDs on the market.

The Force series is available in capacities ranging from 40GB up to 240GB. All of them have virtually the same performance specifications – even the smaller drives. With TRIM support, excellent performance and reliability that SandForce drives are known for, Corsair’s Force series is easy to recommend.