Since the Nvidia RTX 2080 Ti has been out for a few months now, AIB partners have released their custom versions. Here we are going to look into some of the best Nvidia RTX 2080 Ti graphics cards that you can buy right now. Our list includes models from companies such as Asus, EVGA, Gigabyte, MSI and Zotac. We are not going to talk about the different models from Galax, Gainward, Inno3D, Palit and PNY as they are only available in certain regions and getting your hands on them can be a tricky depending on where you live.

Keep in mind that the Turing architecture does have a lot of wiggle room and you can manually overclock these graphics cards in order to get the best performance for the money that you have spent. The overclocking will depend on the cooling solution that is used and will vary from card to card but the out of the box performance is going to be relatively similar.

These are the general specifications of the Nvidia RTX 2080 Ti and the custom models will differ in terms of clock speeds, size and cooling. All the other specifications are going to remain pretty much the same.

Now that we have got the general specifications out of the way lets look into some of the best Nvidia RTX 2080 Ti models that are available on the market. We have compiled this list based on our own experience along with professional and user reviews.

Gigabyte has made a name for itself in the PC segment over the years and Aorus is the company’s premium gaming brand. The card has a core clock speed of 1770 MHz out of the box which is higher than most models on the market right now. The price of the card is very competitive keeping in mind the performance that you are getting and what the competition is offering. 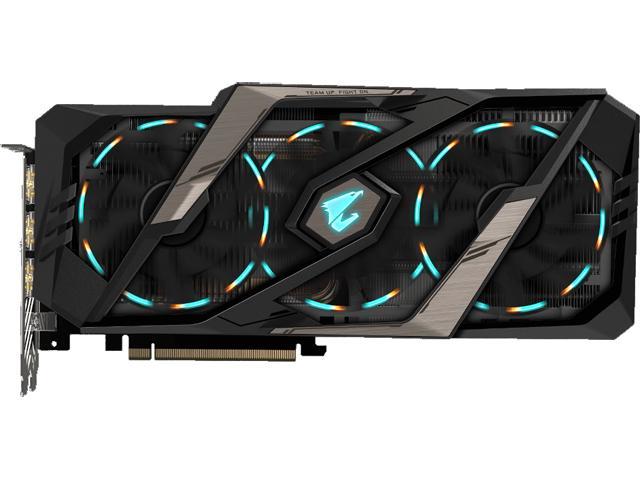 The Gigabyte AORUS Xtreme RTX 2080 Ti has a triple fan design and comes with RGB lighting which you can customize and sync with other components of your build. The card is 11.4-inches long and comes with a custom backplate. For connectivity, you get three HDMI ports, three DisplayPorts and a USB Type-C port.

The Gigabyte AORUS Xtreme RTX 2080 Ti is one of the best if not the best looking RTX 2080 Ti graphics card on the market right now. If you are looking for flashy RGB effects along with the performance then this is a card that we can recommend.

If you like the aggressive design and RGB lighting then the Gigabyte AORUS Xtreme RTX 2080 Ti is the best of the bench keeping in mind the performance that you are getting for the price.

Asus is known for making some great gaming products so there is little surprise that the Asus ROG Strix RTX 2080 Ti gets a spot on our list. The Asus ROG Strix RTX 2080 Ti has a triple fan design so there is plenty of airflow to keep thermals in check. This is a pretty premium and expensive card but the graphics card does offer a boost clock of 1665 MHz which is even higher than the Founder’s Edition from Nvidia. 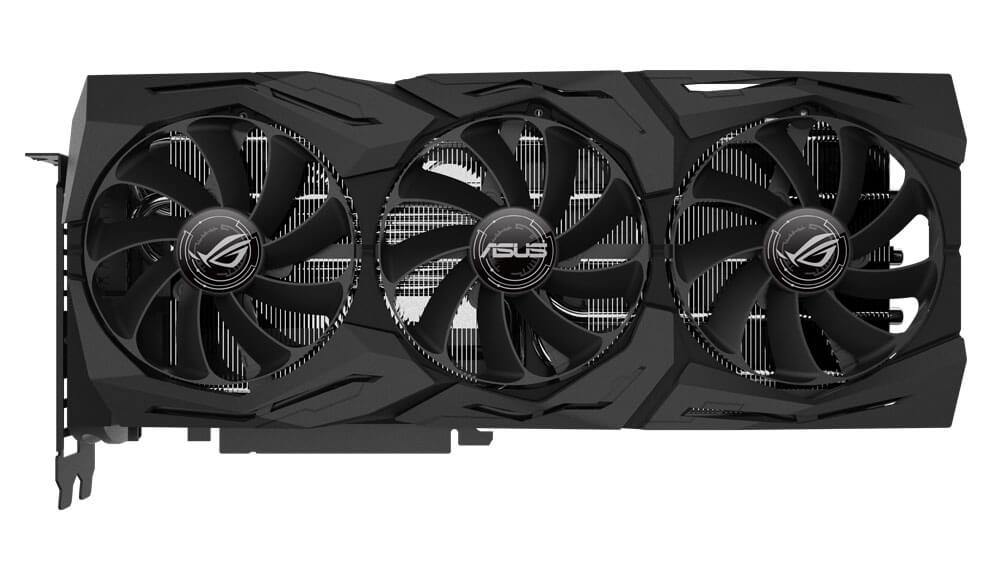 The card is 12-inches long and that is something that you need to keep in mind if you have a smaller case. The Asus ROG Strix RTX 2080 Ti is a robust graphics card and you will be able to overclock it to more than 2000 MHz. Enthusiasts have done this and claim that the card is still pretty quiet even when overclocked to such a degree. Overclocking this graphics card will give you some massive gains when gaming at 1440p or even at 4K. If you are interested in overclocking your graphics card down the line then this is something that you should keep in mind.

The price is a major consideration with this graphics card and that is why we cannot recommend this card to everyone but if you are looking for the best of the best in terms of performance, build quality and features, especially if you already have other Asus components then this is something that you can consider.

The MSI GAMING X TRIO has a boost clock speed of 1755 MHz which is higher than the Asus ROG Strix RTX 2080 Ti and much faster than the Founder’s Edition. The card has a triple fan design so you should not have any thermal issues even when gaming for long periods of time. This is the longest card on our list at 12.8-inches. This is something that you need to keep in mind if you have a smaller case.

The card is beefy and it will need 3 slots, which is pretty common with these cards. The three fans are not symmetrical and that might trigger your OCD but it is not going to be a problem for most people. Like other cards, this one can be overclocked as well and enthusiasts have been able to get the clock speed to 2025 MHz with relative ease.

These overclocks can give you massive The MSI GAMING X TRIO offers RGB lighting like the other cards on this list but this is another premium graphics card that costs a lot of money. 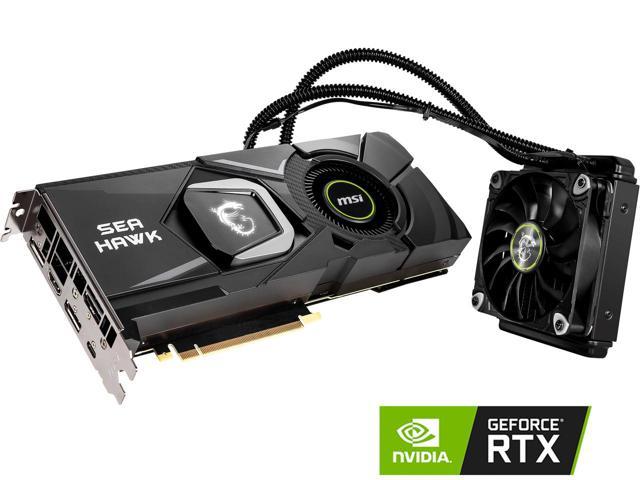 The MSI RTX 2080 Ti Sea Hawk X can have better overclocking performance because of the liquid cooling. Custom liquid cooling can be very expensive and you need to know what you are doing in order to set things up. With AIO liquid coolers things are much easier and all you need to do is install the graphics card and screw in a couple of screws.

This is one of the more compact 2080 Ti cards on the market and is only 10.6-inches long, so case compatibility should not be an issue in most cases. The MSI RTX 2080 Ti Sea Hawk X is a great option for people that want liquid cooling out of the box and do not want to set it up.

The card is also relatively shorter at 10.6-inches, so case compatibility is not going to be an issue in most cases. The card is ideal for mini-ITX or micro-ATX builds. If you are not building a small form factor gaming PC then it would be better to spend some more money to get higher clock speeds and better cooling. If you do not mind losing the extra clock speed and a fan for the cheaper price then this is an option that you can consider.

EVGA cards have had some issues in the past but now the company has made some design changes to fix those issues. The EVGA GeForce RTX 2080 Ti FTW3 Ultra Gaming has a 2.7 slot design but you will need 3 slots in order to house it. The card has a boost clock of 1755 MHz out of the box which is similar to other cards on this list and higher than others. The iCX2 Cooling technology offers better cooling and silent operation when under load. 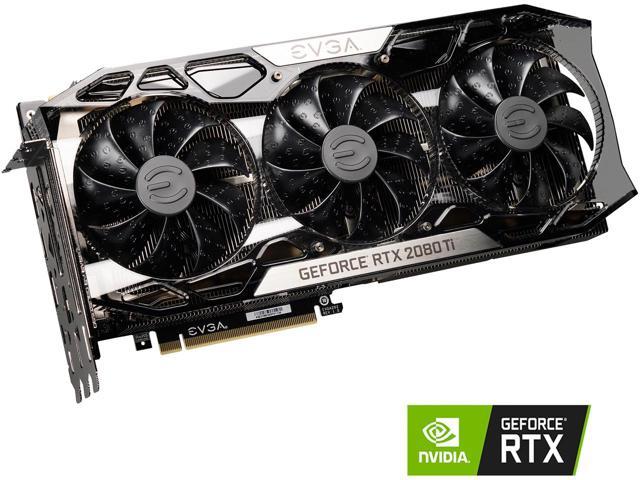 The EVGA GeForce RTX 2080 Ti FTW3 has a triple fan cooler an aggressive design. The Black color should blend in with the rest of your build pretty easily. Overclocking this card is pretty easy and you can get to 2000 MHz without any issues. It comes with all the bells and whistles that you would expect from a high-end card and it delivers when it comes to performance.

The GIGABYTE RTX 2080 Ti Gaming OC is one of the cheaper models that is available right now. GIGABYTE has not skipped on much that the big boys have to offer. The card still has a beefy cooling solution and comes with triple fans but does not cost as much as the models from Asus or other brands.

Out of the box, this card is going to perform similar to the other cards that we have mentioned on this list. The design is not flashy and the color is neutral but it does have a boost clock of 1665 MHz out of the box. The boost clock might not be as high as the other cards on this list but the price is not as high either. The card is 11.3-inches long so while it is not the most compact card in the world, it is not too big either.

The card does have a lower power limit so you will not be able to overclock it as high as other models but it is still a very decent card which can perform similar to the models that we have mentioned here. If you want to get a relatively cheaper RTX 2080 Ti and are not interested in aggressive looks and all that then this is a variant that you should check out.

The Zotac AMP edition 2080 Ti is another great model that you should consider buying as it costs lower than other variants that are available on the market right now. The card has a triple fan cooler and comes with a 1665 MHz boost clock out of the box. The Zotac logo lights up but other than that you do not get any RGB. This is an RTX 2080 so you can expect to see similar performance out of the box compared to other cards that we have mentioned here.

The Zotac AMP edition 2080 Ti is a bit longer and is 12.1-inches. This is something that you should keep in mind if you have a smaller case. The performance is similar to the Gigabyte RTX 2080 OC. If you are interested in getting a relatively cheaper RTX 2080 graphics card then this is another great option to consider.

The Nvidia RTX 2080 Ti is most powerful single graphics card that you can buy on the market right now. We have looked into the different models that you can buy. The Zotac RTX 2080 Ti Twin is the cheapest of the bunch but only come with two fans and the clock speed is not as high as the competition. The Gigabyte AORUS Xtreme RTX 2080 Ti is a variant that comes with all the bells and whistles that you could ask for and the price is decent as well compared to the competition.