Last price update was: June 1, 2020 1:31 am
× Product prices and availability are accurate as of the date/time indicated and are subject to change. Any price and availability information displayed on Amazon at the time of purchase will apply to the purchase of this product.

Meta review: The SanDisk Ultra 3D is marketed as a hard drive replacement for consumers. It seems to serve that purpose well, although it cannot compete with MLC-based drives in terms of endurance and performance.

SanDisk Ultra 3D NAND 1TB Internal SSD - SATA III...
$133.99 $149.99
June 1, 2020 1:31 am
× Product prices and availability are accurate as of the date/time indicated and are subject to change. Any price and availability information displayed on Amazon.com (Amazon.in, Amazon.co.uk, Amazon.de, etc) at the time of purchase will apply to the purchase of this product.
18 new from $133.99
Buy Now

The SanDisk Ultra 3D is an entry-level 2.5″ SATA SSD that was released in parallel with Western Digital’s WD Blue (SanDisk is owned by Western Digital). In other words, these two drives are identical in all but name. As this drive’s name implies, it is based on 3D NAND of the TLC (triple-level cell) variety. As such, some of its main competitors are the Crucial MX500 and the Samsung 860 EVO.

Triple-level cell or TLC NAND Flash memory is generally less durable and – all other things equal – performs worse than multi-level cell, or MLC, memory. However, SSD manufacturers have been able to get around performance issues using clever caching technologies, but also thanks to improvements of TLC production. The most notable such improvement in recent years is 3D, or layered TLC chips.

In the Ultra 3D SSD, SanDisk has used its own 64-layer 3D TLC in combination with a Marvell 88SS1074 controller. This third-party controller is also used in other SSDs, but SanDisk allegedly uses its own firmware. 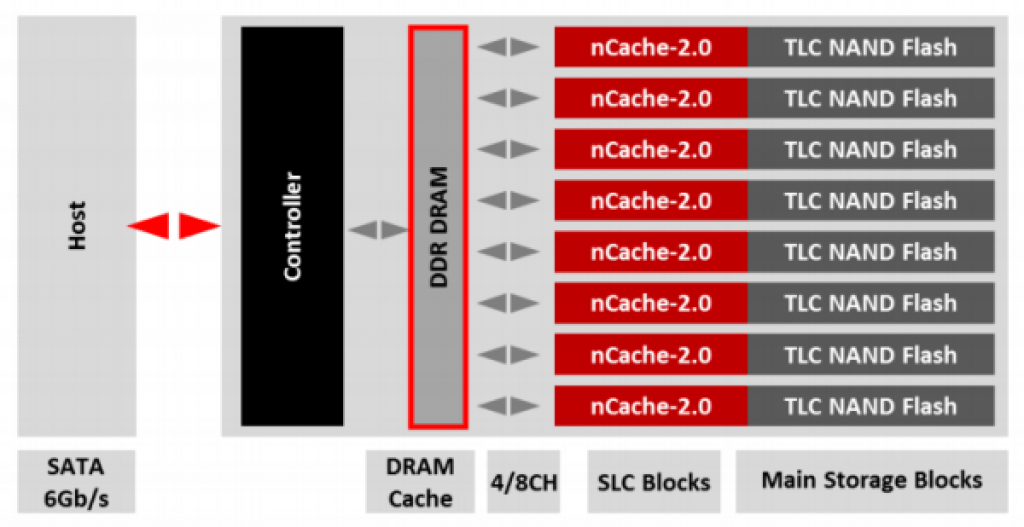 To speed up write transfer rates, many TLC-based drives employ a fast SLC (single-level cell) cache, often in combination with a DRAM cache buffer. Like other SanDisk SSDs, the Ultra 3D uses SanDisk’s nCache 2.0 technology. This is a type of pseudo-SLC that lets a portion of the TLC chips operate in SLC mode, something that will speed up writes significantly as long as the cache isn’t exhausted.

All SATA SSDs have to deal with the performance cap imposed by the 6 Gbps interface. And like many other drives of the same type, the SanDisk Ultra 3D’s sequential, theoretical performance approaches this limit. Therefore most high-end PCs today use PCIe/NVMe-based drives instead, primarily in the M.2 form factor.

According to the official specs, the Ultra 3D seems to make the most of its 3D TLC NAND and offers mostly consistent performance across all capacities (250 GB, 500 GB, 1 TB and 2 TB).

As usual, peak performance is not reached in the smaller 250 GB capacity, but seems consistent from 500 GB and up at:

The Ultra 3D appears to be quite power-efficient compared to other SSDs of the same type, according to tests performed by AnandTech among others. Idle power consumption is average at around 50mW, but power draw during load is comparatively low.

Longevity is of the more important weaknesses of TLC Flash memory. Memory cells are only good for a finite number of writes and will eventually become unusable. And since wear increases with additional bits per cell, TLC NAND (three bits) will wear down much faster than MLC NAND (two bits). This issue can be ameliorated by over-provisioning and wear leveling, meaning that  the drive uses its memory chips evenly and includes spare capacity.

Endurance numbers in TBW (terabytes written) for the SanDisk Ultra 3D are still comparatively low at:

SanDisk initially offered a sub-standard 3-year warranty with the Ultra 3D, but it was retroactively extended to an industry-standard 5 years in march 2018.

Encryption and Other Features

The Marvell 88SS1074 controller used in the SanDisk Ultra 3D supports 256-bit encryption, but this has apparently not been implemented in this consumer-oriented drive.

Overall performance is very good and within a few percent of the fastest SATA drives in our test group. This makes the SU900 compete with the Crucial BX300, Crucial MX200, and Samsung 850 Evo.

We are very pleased with the sustained write performance we got from both test subjects. Unlike planar-based TLC SSDs, the Blue 3D and the Ultra 3D can sustain write transfers in the 500MB/s range no matter how large the file size may be.

7.5Expert Score
Meta review: The SanDisk Ultra 3D is marketed as a hard drive replacement for consumers. It seems to serve that purpose well, although it cannot compete with MLC-based drives in terms of endurance and performance.
PROS
CONS