Last price update was: January 20, 2020 1:04 am
× Product prices and availability are accurate as of the date/time indicated and are subject to change. Any price and availability information displayed on Amazon at the time of purchase will apply to the purchase of this product.

Our meta review: Professional testers are mostly in agreement that the XFX Fatboy is an above-average take on the RX 590. Although not particularly exciting, it offers a bit more than the reference design at an attractive price point.

The XFX Radeon RX 590 Fatboy 8GB OC+ is a factory-overclocked card based on the AMD Polaris 30 XT chip. This GPU is an improvement of the Polaris 20 XTX (RX 580), but similar and based on the GCN 4.0 (Graphics Card Next) architecture. The Polaris 30 XT supports the same DirectX 12.0 and Vulcan feature sets as its predecessor and comes with 2,304 shaders, 144 TMUs (texture mapping units) and 32 ROPs (render output units).

So it’s essentially the same chip, but the Polaris 30 XT/RX 590 GPU is manufactured using a smaller, 12 nm production process at GlobalFoundries, instead of the predecessor’s 14 nm. The result? Improved power-efficiency, with as much as 15% better theoretical performance at the same power consumption.

Like many other non-reference boards, the OC+ variant of the XFX RX 590 Fatboy comes with a slightly (1580 MHz from 1545 MHz, or 2%) higher boost clock out of the box. Unlike Sapphire’s Nitro+ RX 590, however, the card’s 8 GB of GDDR5 VRAM runs at the standard clock speed.

The Fatboy RX 590 has a custom circuit board (PCB) and a cooling solution that takes up three PCI slots worth of internal space. There’s also an aluminum backplate and what XFX calls a Unibody VRM Heatsink, which allegedly increases the heatsink surface area by 50% compared to previous Polaris cards. 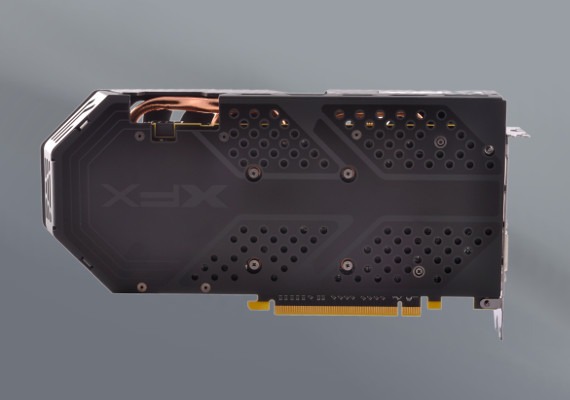 Compared to the preceding Polaris-based cards, the average (reference) RX 590 is about 10% faster than the 8 GB RX 580. This is mainly due to the higher clocks and improved efficiency with the newer production process. Since the XFX Fatboy RX 590 is factory overclocked, it will be about 2% faster still. Although the RX 590 is more efficient than its predecessor, power consumption is still high compared to comparable Nvidia cards (performance-wise). The GPU’s chief competitor is now Nvidia’s Turing-based GeForce GTX 1660 Ti, which is far more efficient, but not necessarily faster in actual games.

The reference RX 590 has a 175W TDP and the power supply (PSU) requirement is 500 Watts. Due to the slightly increased boost clock, the RX 590 Fatboy OC+ will require a bit more power than average, as well as an additional power cable from the PSU.

Notebookcheck: Overall, the power consumption has dropped by around 10 watts compared to the AMD Radeon RX 580. While this is a step in the right direction, the Pascal GPUs from AMD’s biggest rival Nvidia are a lot more efficient.

TechPowerUp: XFX has installed a large triple-slot cooler on their RX 590 Fatboy, which does a good job of keeping the card at reasonable temperature levels without too much noise.

PCWorld New Zealand: … a killer option for no-compromises 1080p gaming, especially if you have a monitor faster than 60Hz. It’s also a very viable 1440p gaming option, especially if you don’t mind dropping graphics settings down from Ultra to High, or have a FreeSync-compatible monitor.

7.5Expert Score
Our meta review: Professional testers are mostly in agreement that the XFX Fatboy is an above-average take on the RX 590. Although not particularly exciting, it offers a bit more than the reference design at an attractive price point.
PROS
CONS